The first global analysis of seabird breeding success in relation to climate has found many species are struggling to produce offspring as ocean temperatures rise.

The study, published in the journal Science, was carried out by an international team of scientists, including the UK Centre for Ecology & Hydrology (UKCEH).

Seabird breeding success depends on the availability of food sources, which is being affected by rising ocean temperatures, and the study found there has been a general downward trend in the number of chicks produced per female per year.

The analysis of 50 years of data from across the world showed declines have been greater in the northern hemisphere, where ocean warming is faster, than in the south. The authors say human impacts like fishing and plastic pollution close to the surface may also be factors. The data show some of the 67 species studied are faring better than others; fish-eating, surface-feeding seabirds are generally worse affected than deeper diving or plankton-eating species.

Dr Francis Daunt of UKCEH, which carries out long-term seabird studies on the Isle of May in the Firth of Forth, says: “Seabirds are sensitive to environmental disturbances and are therefore acting as ‘canaries in the coalmine’, alerting us to the deteriorating health of ocean ecosystems. Their plight indicates other organisms lower down the marine food web, including the fish that they prey on, large invertebrates and plankton, may also be struggling.

“More research is needed to understand why some species are doing better or worse than others. Continued long-term monitoring of seabird populations and further global-scale assessments such as our study are essential to inform effective conservation action.”

Seabirds are acting as ‘canaries in the coalmine’, alerting us to the deteriorating health of ocean ecosystems - Dr Francis Daunt

The research, led by Farallon Institute in California, looked at long-term data on ocean warming as well as breeding successes of seabirds at 46 locations across the world, including two colonies in the UK – at the Isle of May and at Foula in Shetland.

Declines were apparent in several species at both UK study colonies, and these were particularly marked at Foula. This mirrors the situation across many parts of UK, in particular the northern Isles, where breeding failures are more widespread than they were when studies commenced in the 1970s and 1980s for a number of species. However, European shags on the Isle of May have actually shown improved breeding success over last three decades, aligned with a more diverse diet.

Dr Daunt says most UK seabirds rely on small fish to feed their young, and several are surface feeders such as the black-legged kittiwake, so there is considerable concern about their future wellbeing if warming continues. 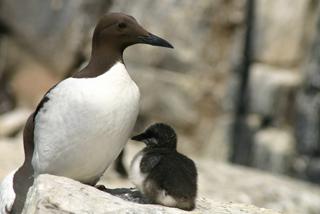 Many species including guillemots are struggling to produce offspring but European shags on the Isle of May, below, have had improved breeding success in the last three decades