The recent record-breaking warm weather has provided ideal conditions for both native moths and rare visitors from continental Europe to thrive.

Organised by the journal Atropos, the charity Butterfly Conservation and the UK Centre for Ecology & Hydrology, this annual public event encourages awareness of moths and the important roles they play in our environment. It invites people to get out into their gardens, parks and the countryside to spot these incredible insects. The records submitted improve ecologists’ understanding of moth distribution and habitat, in order to inform conservation and analysis of how particular species are faring.

There are hundreds of different species of moths ‘on the wing’ in the balmy evenings of late summer and Moth Night wants to receive as many public sightings as possible – it is a perfect outdoor activity for the garden or those ‘staycationing’ this summer. In particular, this year Moth Night is celebrating four types of ‘red underwing’, large, brilliantly coloured moths that are each undergoing dramatic changes in their UK distributions.

With a wingspan of up to 9cm, the Red Underwing is one of the biggest moths likely to be encountered in gardens. A few decades ago it was largely restricted to southern and central England, but the moth has spread rapidly northwards, likely in response to climate change, and has even been recorded in Scotland. It has also moved westwards into Wales and south-west England, with sightings recently for the first time on Ireland and the Isle of Man.

Richard Fox, Associate Director of Recording and Research at charity Butterfly Conservation says: “Moths are on the move in the UK, with many species in decline but others, such as the Red Underwing, are increasing and spreading to new areas. We need more sightings of this distinctive species to get an up-to-date picture and by taking part in Moth Night, everyone can help.”

The Dark Crimson and Light Crimson Underwings are equally spectacular but much rarer species, largely confined to the New Forest in Hampshire and nearby woodlands, where there are some signs of recent spread into new sites. Rarer still is the Rosy Underwing, which is a recent colonist of the Channel Islands. The Dark Crimson Underwing, in particular, is having a good August, appearing in many new places.

Mark Tunmore, Editor of Atropos and founder of Moth Night, says: “Already we have been receiving widespread reports of Dark and Light Crimson Underwing moths in southern England, indicating that the range expansion of these species is continuing, induced by climate change.”

Dr David Roy, Head of the Biological Records Centre based at the UK Centre for Ecology & Hydrology, says: “Although there is much to learn about the red underwings, Moth Night is about all of the UK’s moth species, which are a vital part of the food chain for many other animals and important pollinators of native wildflowers such as orchids. So whichever moths you spot on the three nights, please submit your sightings through the Moth Night website to help with the conservation of these important insects.”

While COVID-19 has prevented this year’s Moth Night public events from taking place, it is still easy to take part from your own home – and you do not need any special equipment to be able to do it. While using light to lure nocturnal moths is the standard method, painting a ‘sugar’ mixture of treacle, brown sugar and brown ale onto tree trunks or fence posts draws in moths for a feast at dusk.

Details of all these techniques are on the Taking Part page of the Moth Night website. To identify and record moth sightings, visit Mothnight.info or get in touch via the Moth Night Facebook page. 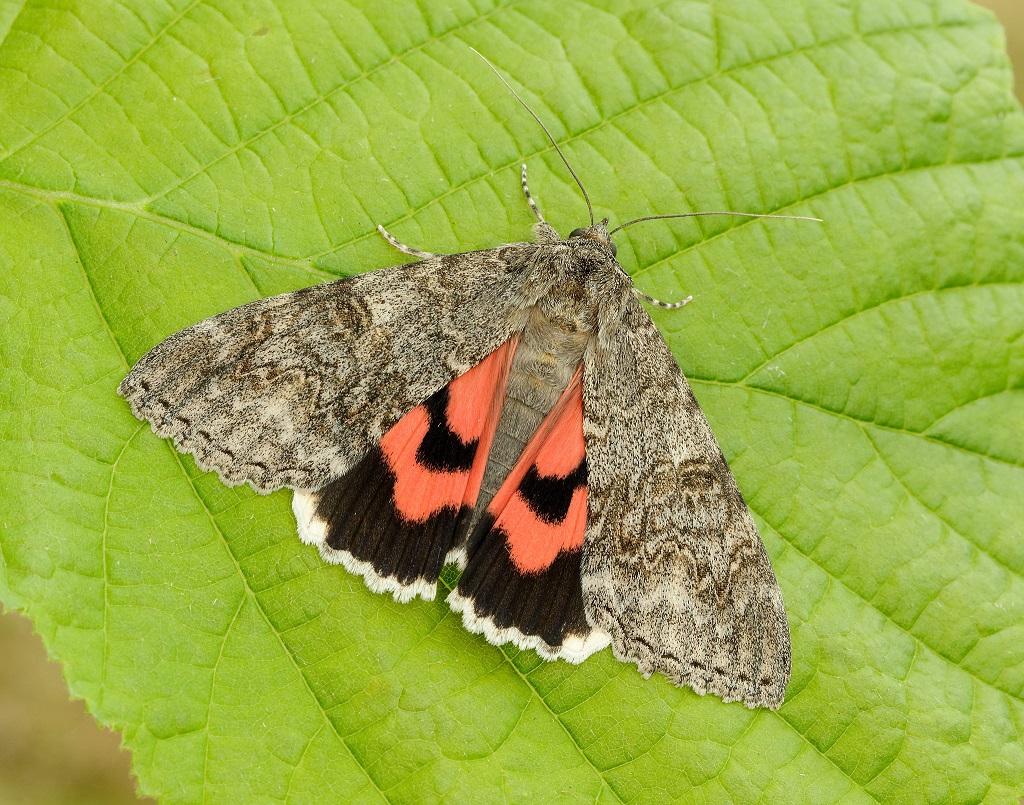 With a wingspan of up to 9cm, the Red Underwing is one of the biggest moths encountered in gardens  Picture: Iain H Leach, Butterfly Conservation