Analyses of animal and plant species trends by scientists at the UK Centre for Ecology & Hydrology (UKCEH) have significantly contributed to the UK Biodiversity Indicators 2020.

The indicators, produced annually since 2007, track progress towards meeting national and international biodiversity targets. They show whether different categories are improving, deteriorating or had little change in the long-term (over decades) and short-term (five years).

This year’s indicators, published by the Joint Nature Conservation Committee (JNCC) and the Department for the Environment, Food & Rural Affairs (Defra), are based on a variety of data provided by nearly 100 different organisations, including government agencies, research institutes and voluntary groups.

Dr David Roy, Head of the Biological Records Centre based at UKCEH, says: “UKCEH plays a leading role in partnerships to provide essential evidence on how hundreds of UK species are faring, which then informs policy decisions and conservation action. Our analyses contribute to a broad range of the biodiversity indicators, relating to UK priority species, butterflies, pollinating insects, plants, invasive non-native species, habitat connectivity and the threat of air pollution to sensitive habitats.”

UKCEH analyses distribution trends for many animal and plant species, including pollinators.

The Pollinating insects indicator showed 49 per cent of bee and hoverfly species are becoming less widespread between 1980 and 2017 and just 19 per cent increasing their geographic range. However, there is little change in in the past five years.

Analysis of long-term trends in UK butterflies has shown that since 1976, populations of specialist species that rely on specific types of habitats, including the rare High Brown Fritillary, have declined significantly. ‘Species of the wider countryside’ – generalists, such as the Speckled Wood, that are able to exist in a variety of habitats – show no change. Since 2014, there has been no overall significant changes across all species.

These trends, based on analysis of records submitted to the UK Butterfly Monitoring Scheme, contribute to the biodiversity indicators for Butterflies, as well as the Status of UK priority species and Habitat connectivity.

There has been a long-term increase in invasive non-native species in every environment, thereby putting pressure on native biodiversity and ecosystems.

UKCEH collates and analyses records through the Defra-funded GB Non-Native Species Information Portal (GB-NNSIP). The data showed that since 2010 the number of invasive non-native species, established in or along 10 per cent or more of Great Britain’s land area or coastline, has increased in freshwater environments (from 12 to 13 species), marine environments (from 24 to 29 species) and terrestrial environments (from 57 to 61 species).

The UK Biodiversity Indicators 2020 included, for the first time, data collected as part of the National Plant Monitoring Scheme (NPMS), which is run by a partnership comprising UKCEH, the Botanical Society of Britain and Ireland, JNCC and Plantlife. The Plants of the wider countryside indicator is based on data collected by NPMS volunteers relating to four broad habitats, and has been included as an ‘experimental’ indicator pending further analytical development work.

The current trends show an overall reduction of 27 per cent in monitored plants in arable field margins between 2015 and 2019, while recorded declines in these key species within three other broad habitats – broadleaved woodlands and hedges; bog and wet heath; and lowland grassland – were all levelling off by 2019.

Among the indicators showing both long and short-term improvements are those relating to air pollution, which are based on UKCEH research for Defra.

In all, there are 24 published indicators within five biodiversity goals, A to E, and within the indicators there are ‘measures’ – sub-categories – that show the long-term and short-term trends.

Of 42 long-term measures, 23 showed an improvement, 14 were deteriorating, three had little or no change and there was insufficient data on two. Of the short-term measures, relating to a five-year period, 18 of 39 showed an improvement, eight were deteriorating, 12 showed little or no change and one had insufficient data.

This year’s results showed long-term deteriorations in priority species and habitats, pollinating insects, butterflies and some birds and livestock, but improvements in pollution, sustainable agriculture, forestry and fishing, as well as increases in both biological data collection and conservation areas.

The UK Biodiversity Indicators 2020 are published at https://jncc.gov.uk/ukbi 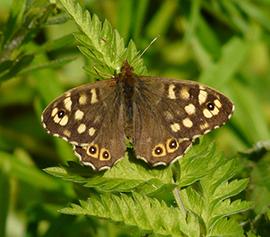 Long-term trends show generalist butterfly species that can exist in a variety of habitats, such as the Speckled Wood, have fared better than habitat specialists