An international ban on ozone-depleting chemicals, introduced in the 1980s, has given the planet a greater chance of avoiding significant rises in global warming, by protecting vegetation.

A new study has found that increased use of substances such as chlorofluorocarbons (CFCs) - which were widely used in refrigeration, air cooling systems and aerosol sprays – would have reduced terrestrial habitats’ contribution to mitigating climate change.

CFCs damage the ozone layer, which shields Earth from the sun’s ultraviolet (UV) radiation, and the discovery of a large hole in the layer above Antarctica in 1985 prompted calls for international action. Further destruction of the ozone layer would have exposed vegetation to damaging UV levels, affecting its ability to absorb carbon dioxide (CO2) from the atmosphere through photosynthesis.

The new research, which involved the UK Centre for Ecology & Hydrology, estimated that without the phased ban on CFCs under the Montreal Protocol in 1987, there would have been around 580 billion tonnes less carbon stored in forests, other vegetation and soils by the end of this century. This reduction in offsetting of CO2 emissions would have resulted in a further rise of 0.8 degrees Celsius in global temperatures, thereby accelerating existing rates of global warming caused by fossil fuel burning.

UKCEH climate modeller Dr Chris Huntingford, a co-author of the study, published in the journal Nature, says: “This analysis reveals a remarkable linkage, via the carbon cycle, between the two global environmental concerns of damage to the ozone layer and global warming.”

The projected rise of 0.8°C would have been in addition to the estimated increase of 1.7°C, which previous research suggested would have been caused by CFCs trapping greenhouse gases in the lower atmosphere.

The planet has already experienced around 1°C warming compared to pre-industrial times, due to greenhouse gas emissions from human activities. Even if countries were now able to dramatically lower CO2 emissions as a plan to lower increases in global temperatures, then the projected, additional 2.5°C of warming from unrestricted use of CFCs would have meant a total rise of 3.5°C by the end of this century. This is far in excess of the maximum 1.5°C rise above pre-industrial levels that many scientists see as necessary in order to avoid some of the most damaging effects of climate change.

Dr Huntingford says: “Robust international action is needed to drastically reduce current greenhouse gas emissions if society aims to limit global warming. However, the ban on CFCs has given the planet a greater chance of being able to cap global temperatures rises at 1.5 or 2 degrees Celsius.”

The international team of researchers from the UK, USA and New Zealand developed a new modelling framework, bringing together data on ozone depletion, plant damage by increased UV, the carbon cycle and climate change. Its calculations were based on the premise that the use of CFCs would have continued to rise by three per cent a year.

Dr Paul Young of Lancaster University, who led the study, explains: “Our new modelling tools have allowed us to investigate the scorched Earth that could have resulted without the ban on ozone-depleting substances. With our research, we can see that the Montreal Protocol’s successes extend beyond protecting humanity from increased UV to protecting the ability of plants and trees to absorb CO2.” 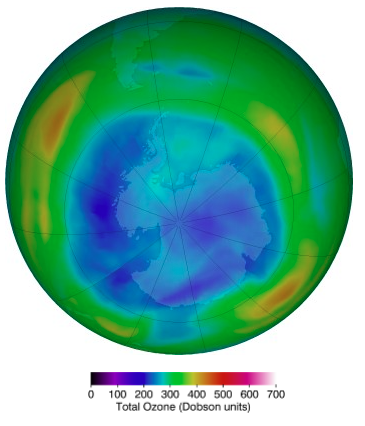 A false-colour view of total ozone over Antarctica on 16 August 2021. It was concerns over the hole in the ozone layer that led to the Montreal Protocol   Image: NASA Ozone Watch