This year scientists from UKCEH will be presenting at the 2020 American Geophysical Union (AGU) Fall Meeting. The AGU fall meeting is the largest international Earth and space science meeting in the world and is taking place virtually with over 23,000 participants from 113 countries. UKCEH scientists are presenting new, innovative research that utilises Earth observations to deepen our understanding of weather and hydrological processes, and improve forecasts across a broad range of timescales. In this blog post our scientists - Seonaid Anderson, Emma Barton, Steven Cole, Toby Marthews, Semeena Valiyaveettil Shamsudheen, Chris Taylor & Joshua Talib - highlight the presented research.

Seonaid is presenting research from the NFLICS “Nowcasting Flood Impacts of Convective storms in the Sahel” project (oral, 16 December). In the Sahel the main drivers of flooding are intense storms which develop in the afternoon and move towards the coast. In this research, historical and real-time satellite data are combined to forecast the location of storms in the following six hours. Using data from past flood events, the chance of urban flooding for localities in Dakar, the capital of Senegal, is also predicted. This research, funded under the Science for Humanitarian Emergencies and Resilience (SHEAR) programme, and conducted in collaboration with colleagues in the national meteorological agency of Senegal, Agence Nationale de l'Aviation Civile et de la Météorologie (ANACIM) and at GeoRisk Afric, Dakar, has led to the running of a real-time prototype forecasting system at ANACIM during the 2020 Senegalese rainy season (June to September).

Semeena’s research focuses on land-atmosphere coupling across West Africa and its impact on rainfall (poster, 16 December). Soil-water deficiency can limit evapotranspiration during periods of low rainfall, which leads to warmer and drier conditions in the lower atmosphere. Deep convection is typically triggered in the afternoon, with associated rainfall affecting soil moisture. In this study we investigate the influence of soil moisture on rainfall over southeast Mali on 25th April 2019 in ensemble forecasts of the UK Met Office (UKMO) forecast model and regional convection-permitting UKMO Unified Model simulations. Both model configurations highlight a soil moisture influence on afternoon rainfall intensity in the chosen case study.

Emma’s work examines the influence of space-time variability in soil moisture on the formation of strong convection on the Tibetan Plateau (TP) using satellite observations (oral, 16 December). Results indicate a preference for late afternoon deep convective initiation over dry soils, close to wet-dry boundaries, consistent with previous findings for the Sahel and Europe (Taylor et al. 2011, Taylor 2015). The signal is strongest for less vegetation and low topographic complexity. In addition, the convective storms are only sensitive to mesoscale (~10km) soil moisture variations for lower winds speeds. The results demonstrate that even in this mountainous region, local soil moisture variability still plays an important role in storm development. 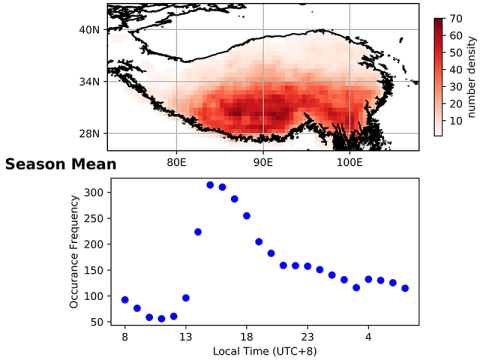 Toby’s research focuses on the dynamics of tropical wetlands and the uncertainties involved in reliably characterising them in remote sensing products, as well as the limitations of current prediction systems at a global scale (poster, 7 December). Despite the key role of tropical wetlands in hydrological and biogeochemical cycles and the enormous value they provide to human society in the form of multiple ecosystem services, reliable data on the extent of global inundated areas and the magnitude of their contribution to local hydrological dynamics remain surprisingly uncertain. We have taken a leading global data product on inundation extents (GIEMS) and matched it against predictions from a leading global hydrodynamic model (CaMa-Flood) driven by runoff data generated from the JULES land surface model using meteorological data from the eartH2Observe project. The model and the data product perform well in large wetland regions, with a good match between corresponding seasonal cycles. However, at finer spatial scale the balance between underestimated components of groundwater inflow, infiltration and evaporation becomes more significant, with some wetlands displaying a clear and quantifiable displacement between observed and simulated inundation. 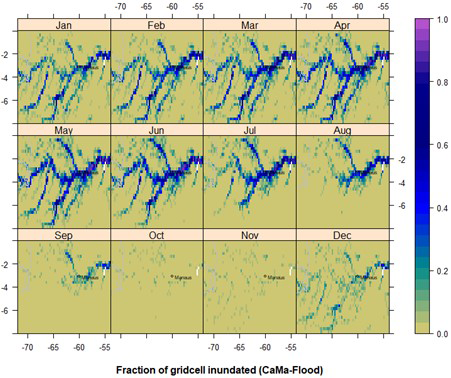 Chris is presenting work on weather forecasting in West Africa, and whether the location of storms several days ahead is more predictable than we might think. During the rainy season in the Sahel, storms typically occur every few days. Each storm leaves a signature on the ground of very wet soil which can persist for several days. Where the soil is wet, the surface effectively cools and moistens the atmosphere, which can affect both the initiation of new storms and existing storms travelling across the region. The results (oral, 16 December) reveal that the effect on subsequent storms of a single downpour can be identified even 5 to 10 days later in analysis of satellite images.

Finally, Joshua is researching the response of land-atmosphere interactions across West Africa to intraseasonal variability of the West African monsoon (poster, 16 December). His research shows that even though precipitation across West Africa varies substantially on daily timescales, a land surface response is observed to intraseasonal variability. The land surface response influences surface energy fluxes and mediates land-atmosphere interactions. For example, during intraseasonal periods of low rainfall, the surface across the Sahel warms and dries, increasing near-surface air temperatures, enhancing the local heat-low circulation, and shifting the African Easterly Jet southwards.