The hydrological situation has been extremely mixed of late. June began with the Environment Agency responding to concerns from farmers about drought, but a week later, there was severe flooding in parts of central England where about a month’s worth of rain fell in one day. In this blog post, the latest in a series, we consider what may be in store for the rest of summer 2019 and beyond.

July has, so far, been a very dry month for most of England and Wales, with little appreciable rainfall across southern and eastern England. The summer weather has been particularly welcome given the very wet start to summer, which saw severe localised flooding in June.

Our recent Hydrological Summary shows that rainfall for June was notably above average across much of England & Wales, with large areas of central England and north Wales recording more than 200% of average. The majority of the rainfall fell between the 10th and 12th (in some places, around 250% of the June average fell over this period), with daily totals exceeding 80mm in several rain gauges in Kent and Lincolnshire on the 10th. 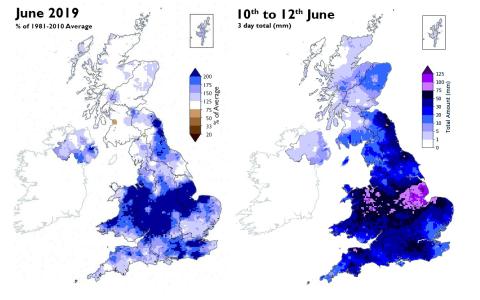 This period of intense rainfall led to severe flooding in Lincolnshire where the River Steeping burst its banks at Wainfleet on the 12th. Around 600 homes were evacuated and 130 properties were flooded with some people unable to return to their properties for up to 10 days. The RAF used ballast to repair the banks and the Environment Agency operated high-volume pumps to drain the water away. On the 11th in Kent, rail services were disrupted as tracks flooded, sink holes emerged on the M25 and there were some reports of property flooding. In Bristol, play at the Men’s Cricket World Cup was delayed. Later in June, thunderstorms and heavy rainfall on the 24th in Scotland and 25th in southern England resulted in flash flooding and transport disruption.

The wet June meant river flows were generally in the normal range or above, with some across Wales and central England registering more than two to four times the average. In contrast, flows in the slow-responding, groundwater dominated catchments in south-east England remained below normal, while groundwater levels fell and were, in general, below normal to notably low. 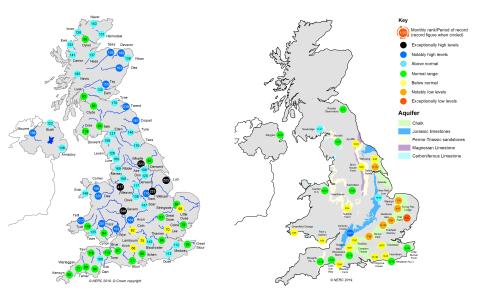 Comparisons have been made between June 2019 and the summer floods of 2007 and 2012; certainly, in central England, June 2019 was the third wettest on record (from 1910) after those years. However, summer 2007 was a severely extreme episode associated with widespread flooding and 2012 saw numerous flooding episodes throughout the summer, while 2019 has so far seen more localised, albeit severe, flooding.

Furthermore, when the monthly mean flows are compared, we can see that new June record flows were established across eastern England in June 2007 and northern and western parts of the UK in June 2012. In 2019, although several catchments registered more than twice the June average, and the Weaver in Cheshire more than four times the June average, no new monthly mean flow records were established. However, peak river flows (the highest flow in the month) in June 2019 ranked highest ahead of 2012 on the Whiteadder (on the Scottish Borders), and ahead of 2007 on the Weaver and Severn. 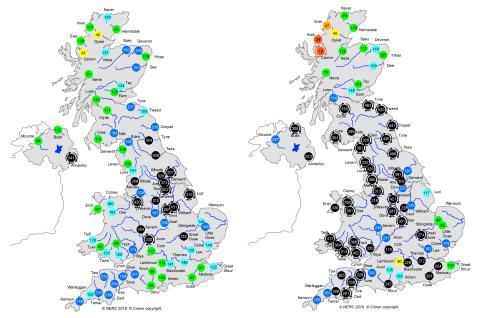 What about the drought concerns?

Despite rain in June, concerns about drought remain as over the long-term, rainfall and river flow deficits can be seen in accumulations extending back to the summer of 2016.

The dryness of the last 12 months is shown on the UK Drought Portal. Even though there have been wetter interludes, and the focus of the dryness has varied in location around the country, much of the period since the summer of 2016 has seen below average rainfall. 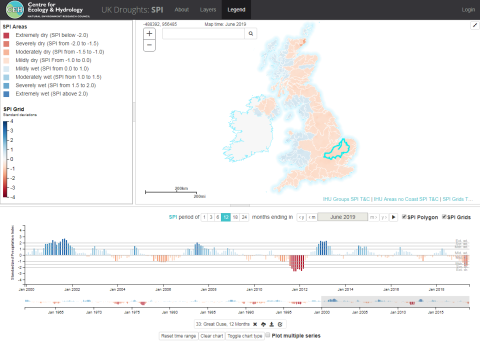 UK drought portal showing the SPI-12 (rainfall averaged over the last 12 months) for the period July 2018–June 2019). The graph shows the SPI-12 time series for the highlighted catchment (Great Ouse)

Entering the summer, there were concerns for water resources pressure following the dry spring (particularly in southern and eastern areas) and low recharge over the winter. For the winter half-year (October–March), most areas received below average rainfall and a number of catchments recorded less than half the average river flow. This in itself came after the exceptionally arid summer of 2018.

Average river flows over the period since the early autumn were also very low across many southern and eastern catchments. The lack of rainfall and low river flows have been associated with wildfires, algal blooms and fish deaths.

The low groundwater levels, and associated low river flows, reflect not just the recent dry months but a lack of recovery over the winter half-year when aquifers are normally replenished.

In much of lowland England, this comes after two relatively dry winters (2016/2017 and 2017/2018) meaning the lack of recovery in one winter half-year was compounded the following year. The overall evolution of groundwater levels and river flows over the last few years show this markedly. In 2018, river flows and groundwater levels recovered to some extent as a result of a very wet spring in south-east England.

However, this year, the spring was dry, so the response of groundwater levels has been muted and we entered the summer from a below normal baseline. Despite flow responses from the heavy June rainfall, flows have since recommenced their seasonal recession in many catchments, and at the start of July flows were again in the normal range or below normal across much of England. 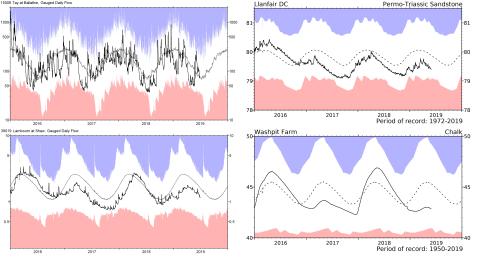 Soil Moisture Deficits (SMDs) have been above normal for the UK for much of the past 18 months and although soils in June were wetter than average, the drier, warmer weather that has followed into July is likely to mean that soils will have become drier.

The situation can also be tracked with CEH’s COSMOS-UK observatory. In many southern and eastern areas soil moisture levels mostly declined through the spring, and in many areas, soil moisture contents at the end of May were below average. Soil moisture responded to rainfall in June across the Midlands, but as drier conditions were established towards the end of June and start of July, soil moisture has begun to fall again.

As noted in the National Drought Group statement in June, the dry soils caused some agricultural stress in eastern England where farmers had to start irrigating crops earlier in the growing season than normal. Pressures were also felt in north-east Scotland, where recent rainfall has been very welcome for agriculture.

Despite the wet June and some replenishment of farm reservoirs, concerns continue for the agricultural sector as crops and silage cuts depend on water over the summer. Although immediate concerns about abstraction restrictions in the spring will have been alleviated by the June rainfall, conditions over the remains of summer will determine whether restrictions are enforced.

The June rainfall topped up reservoir levels, which at the end of May were already relatively healthy. Stocks for England and Wales were near average for June, and were around average or above average for the time of year across the country, with the exception of south-west England where stocks at Roadford and Colliford were around 10% below average for June, the latter dropping relative to average.

What is the outlook for the summer of 2019 and beyond? 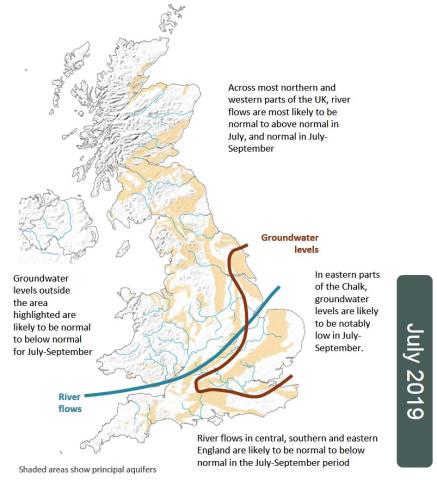 This is because although the meteorological forecast is very uncertain, summer rainfall does not usually have much influence on river flows and groundwater levels in south-east England (unless it is very exceptional, as in June).  In the summer half year, evaporation is much higher so the amount of rainfall entering rivers and aquifers is reduced significantly.

The outlook therefore suggests a continuation of below normal river flows in the south-east and groundwater levels, which are unlikely to recover and which could decline further if the rest of summer is warm and dry, as it has been in early July. This implies a continuation of environmental stresses and pressure on abstractors, with potential impacts on agriculture in eastern England.

However, while the impacts on crop yields and the environment are likely to continue, the relatively healthy status of the majority of reservoirs mean major water restrictions, including hosepipe (or temporary use) bans over the summer are unlikely.

The longer-term picture is more difficult to assess, even short-term seasonal forecasting is extremely challenging. But what we do know is that the majority of major droughts in southern and eastern England have resulted from a succession of dry winters. Therefore, irrespective of what happens this summer, the autumn and winter will be critical for 2020 drought prospects, particularly in south-east England.