We held our seventh Cumbrian Lakes Research Forum in November 2022, our annual event for researchers and practitioners working on freshwater ecosystems in the Lake District. Dr Ellie Mackay tells us more about this year's proceedings...

It’s been an interesting year for the Cumbrian lakes in the media, with a particular focus on algal blooms and their links to pollution from human activities. It was no surprise that these issues were key discussion points during our annual research forum meeting, along with some ‘good news’ stories around restoration activities, changing practices, policies and people.

The talks, as usual, covered a diverse mix of topics that are of great importance for both the research and practitioner communities, spanning scales from individual lakes to catchments, regions, and the whole UK. The first talk of the day [PDF], from UKCEH’s Heidrun Feuchtmayr, provided an overview of a very recent mesocosm experiment that investigated the role of organic phosphorus in the production of taste and odour (T&O) compounds.

The project was a large collaborative effort involving scientists from across Europe participating as part of the EU-funded AQUACOSM+ project. Additional funding for the work came from the water industry, which faces challenges with identifying and reducing the drivers of T&O, issues that affect the water quality experienced by their consumers. However, as Heidrun suggested, disentangling the causes of these problems is very challenging since the microbes producing T&O are a diverse group, being affected by a complex combination of environmental influences.

Experimental approaches, such as those based upon mesocosms, allow researchers to isolate some of these important influences, giving us a better understanding of cause-and-effect.

Scaling up to the catchment-level, Rebecca Powell from the National Trust gave a ‘fly-through’ tour of several ambitious catchment restoration projects in Cumbria that have been undertaken as part of the national ‘Riverlands’ project. Projects from large-scale river re-meandering to farm pond creation are designed to reconnect the water in our landscape with floodplains and wetland areas. This brings about multiple benefits by slowing water flow, providing drinking water sources, and improving wetland habitats to support greater biodiversity.

Ongoing monitoring is assessing how the changes are impacting the hydrology of the sites, and there is enthusiasm for also quantifying biodiversity changes during the restoration process.

We then heard from one of our early career researchers, PhD student Dan Harvey, who is investigating spatial variation in, and species-specific effects of, microplastic consumption by macroinvertebrates. Dan, working with supervisors at Lancaster University and UKCEH, gave us an overview of microplastic consumption patterns along rivers that drain into Morecambe Bay and showed that certain groups of animals consumed more plastic. His future work will investigate the formation of microbial biofilms on plastic particles, which could be affecting the palatability of plastics to these animal consumers. 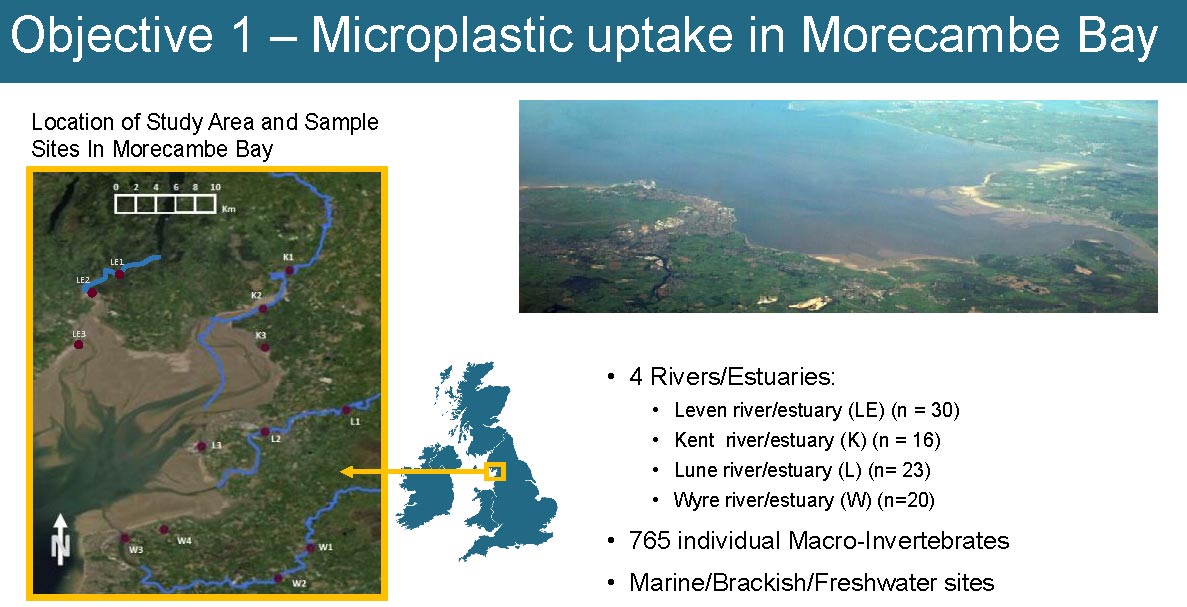 Following a break for lunch, I presented results [PDF] from the latest Lakes Tour survey. This is a five-yearly snapshot of the seasonal condition of 20 lakes and tarns in the Lake District. These lakes and tarns span multiple gradients in size, depth, water residence time and productivity, and each has been sampled since the survey was initiated in 1984. As a result, we now have a nearly 40-year time series of ecological information from these lakes and can start to look at long-term changes in their condition.

Looking at the data from across all of these lakes, there are some signs of improvement. For example, concentrations of nutrients have been declining at some sites, especially at sites that have been the most impacted in the past. However, there is relatively little change in measures of water clarity and some large declines in this measure occurring at some of the least impacted sites. The cause of this change is currently unknown but could relate to widespread increases in dissolved organic carbon concentrations that have occurred in response to reductions in sulphur deposition.

These data provide a ‘bigger picture’ of how our lake environments are changing, highlighting where we need to focus our attention on identifying the causes of change, and taking management action.

The following three talks brought us back to issues raised by some of the media coverage of algal blooms this year. The first [PDF], by Martyn Kelly (Bowburn Consultancy), gave us a different perspective on the much-maligned cyanobacteria. His talk focused on the natural history of the benthic (bottom dwelling, attached) forms of this group, which are common on the rocks and sediments of relatively pristine lakes and rivers. Using beautiful photographs and water colour ‘re-constructions’ of this microscopic world, Martyn showed how these organisms help to provide structure and capture scarce nutrients for the wider microbial community that inhabits these environments and forms the base of their food webs.

The next talk from Jayne Wilkinson (South Cumbria Rivers Trust) highlighted the development and trialling of new technologies to address nutrient pollution from septic tanks. These dispersed sewage systems, used by homes and businesses not on the mains sewer network, can be an important nutrient source to lakes and rivers in rural areas, particularly when poorly sited or maintained. Standard septic tanks have no mechanism for removing nutrients from the water they discharge to the environment. Jayne introduced some new trials being conducted on technologies that would add this nutrient stripping capacity to tanks in the Windermere catchment.

Windermere and its catchment were also the topic of the talk [PDF] by Ben Surridge (Lancaster University) on the first results from ‘The Big Windermere Survey’. This is a new citizen science initiative to engage the community with monitoring and understanding water quality in Windermere and the River Leven. The first survey in June attracted just under 100 citizen scientists to take measurements and a variety of water samples from sites around the lake shore and in the rivers, lakes and tarns that feed into Windermere.

Results from the June survey provided a snapshot of nutrient and faecal indicator organism conditions, showing generally good water quality across the sites, but with localised areas of poorer quality that require further investigation. Data from the survey are being made freely available.

The final talk of the meeting [PDF], from Peter Hunter (Stirling University), introduced us to a range of new tools and techniques for improving our understanding of algal blooms in lakes and reservoirs. The first of these was the UK Lakes Observatory which uses satellite data to quantify surface chlorophyll a concentration, a measure of algal biomass, for over 900 waterbodies in the UK every week. He then gave an overview of new innovations in satellites and sensors that are being used at Stirling to develop sensor networks, which can be linked to models to inform algal bloom forecasts.

Following the presentations, we closed our meeting with a discussion of positive initiatives, activities and outcomes that have occurred over the last few years, including good news stories on river and lake restoration, the collection of long-term monitoring data for upland lakes, and the role of citizen science and conservation volunteering in public engagement with the natural environment. We also considered how new communication methods, such as online meetings, have facilitated new interactions among scientists, local authorities, policy makers, and regulators. This is a development that could stimulate improved understanding and collective efforts towards improving the state of the water environment.

With that in mind, and by a huge majority vote, the Cumbrian Lakes Research Forum will return next year in a new hybrid format! 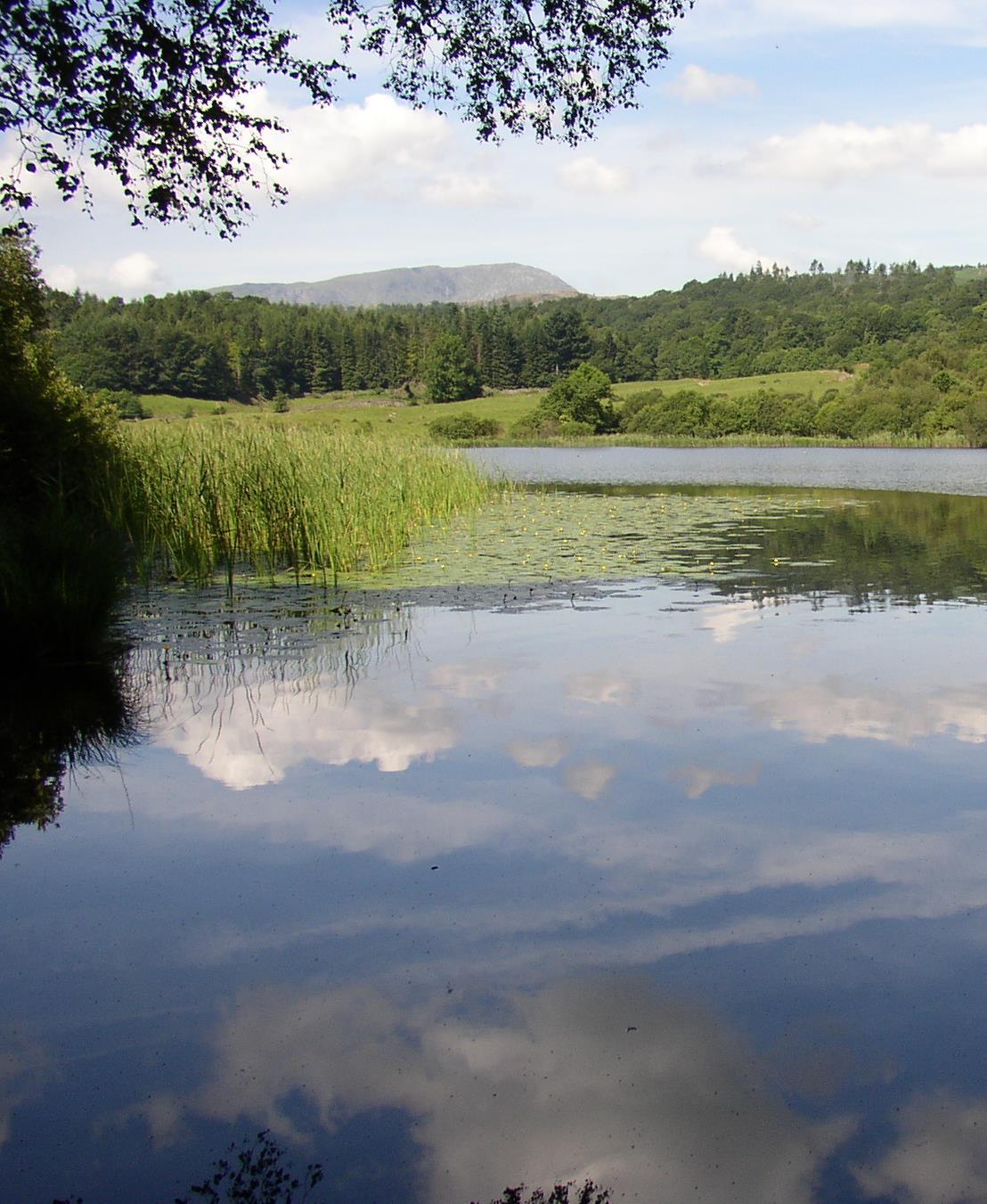