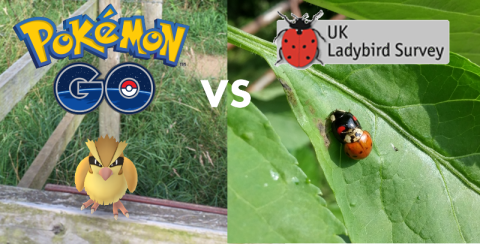 Pokémon-Go encourages millions of players to explore their local area collecting imaginary creatures. However, if the Pokémon they caught were instead observations of real species they could produce more wildlife observations in 6 days than have been collated over the past 400 years by naturalists1.

Smartphone apps designed to record (real) wildlife have been available for a number of years. These apps work in much the same way as Pokémon-Go, users walk around the landscape and take photographs on their phone of species that they see. Some users, like Pokémon players, are motivated to “catch ‘em all”! In the UK the Biological Records Centre at the Centre for Ecology & Hydrology has developed apps for butterflies, ladybirds and dragonflies amongst many others. Wildlife observations collected in this way increase our understanding of ecology and conservation, highlighting major losses of biodiversity in most regions of the world.

Why is Pokémon-Go more popular than wildlife apps?

Given the world’s recent obsession with Pokémon-Go, why have recording apps not shared the same popularity? Becoming a Pokémon trainer (as players are known) is relatively easy - walk around, throw some virtual balls at virtual animals and before you can say “Pikachu” you can be showing off your collection of captured Pokémon to friends. This appeals to a group of motivating factors such as reputation (“People will look up to me if I catch more Pokémon”), rewards (“I will get more Pokémon if I play”), and hedonism (“It’s really fun to catch Pokémon"). In contrast, recording wildlife sightings via apps is much more challenging than capturing Pokémon. For example, real wildlife can move off before you get a good photograph and species identification can take years to learn for some taxonomic groups. Additionally, social elements, feedback, rewards, and game elements (eg. weekly competitions) are rarely as prominent as in games like Pokémon-Go.

How could we improve wildlife recording apps?

Pokémon-Go has undoubtedly got many researchers thinking about how wildlife recording apps could be improved to get a fraction of the same interest, but the way forward is not clear. Motivating factors present in Pokémon-Go could be targeted: reputational motivations such as user profiles and weekly challenges could be added, the fun of apps could be increased by focussing more effort on user experience and design, and social elements could be enhanced. However, adding game elements is prone to encourage cheating, for example an app that rewards those who record the most species might see a rise in the number of false records being submitted. It is therefore important to reward ‘good’ behaviour, for example rewarding people who submit records that are verified as correct by experts, or who help others come to a correct identification. In addition to recorders there is also a community of expert naturalists who support wildlife recording apps by verifying sightings. These experts give up their time for free and may be more willing to do so if the process is made more fun, social, and rewarding.

Increasing the use of recording apps would add to an already impressive amount of data collected by members of the public. This data is vital for understanding how and why the UK’s biodiversity is changing. It has contributed to the RSPB’s State of Nature report and the JNCC’s Biodiversity indicators as well as numerous other reports and scientific publications. These analyses are possible as wildlife recordings collected via apps are shared with the National Biodiversity Network (NBN), and onwards to the Global Biodiversity Information Facility (GBIF) where they can be downloaded by researchers.

Is it just a frivolous fad?

It remains to be seen who would use a ‘gamified’ wildlife recording app. The reasons for getting involved would likely be diverse - would users care about wildlife and conservation or would they be in it just for the instant gratification of a game? How long would they play for before they got bored? Do existing naturalists want game-like features in their recording apps or would it be off-putting? Would an explosion of novice wildlife recorders overload existing infrastructure and dilute high-quality data from experienced recorders?

The extent to which game elements can be added to wildlife recording apps is open to question: the benefits they bring must be weighed against the app’s sustainability and the quality of data produced. However, there are surely lessons to be learned from the extraordinary popularity of Pokémon-Go and its success in encouraging huge numbers of people to go outside and explore their environment.