Need help identifying a moth? Want to know which moth species might be on the wing tonight in your area?  Now you can find out easily using ‘What’s Flying Tonight’, a new smartphone app. Lead scientist and developer Dr Tom August tells us more...

What's Flying Tonight is an app developed in partnership with Butterfly Conservation and UKMoths over a period of three years. We make use of the millions of records gathered through Butterfly Conservation’s National Moth Recording Scheme, to provide an illustrated list of the larger moth species seen at this time of year in your area. With moth images, flight charts and the frequency that each species has been recorded based on your location and the date, What’s Flying Tonight can help with species identification. 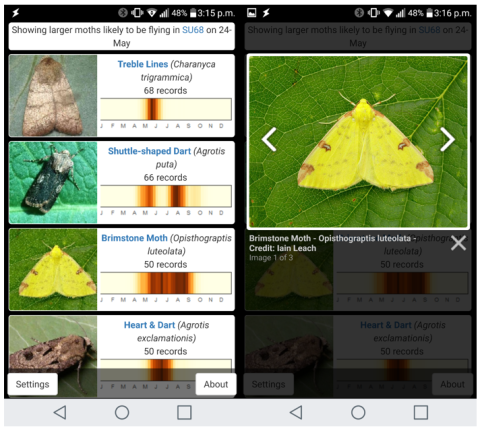 There are approximately 900 larger moth species in the UK, which can make learning to tell them apart a daunting task. We designed the app to make this easier by showing you which species are likely to be flying anywhere in the UK on a given night. Because different species fly at different times of the year and are found in different parts of the UK, this can greatly reduce the potential list of moth species and decrease the chance of misidentifications.

The app uses data from the National Moth Recording Scheme to work out what you are likely to see. This scheme has been running since 2007 and, thanks to the work of many volunteers, has gathered 25 million records of moths, providing a detailed map of which moths are likely to be seen at any time and place in the UK.

What’s Flying Tonight is designed to work like an app from a smartphone or tablet, but will also work from a computer. It can use the GPS in your device to automatically locate the correct moth records, but you can also manually change the date and location.

Moths are an important part of the UK’s biodiversity, for example they are an important source of food for bats, birds and many invertebrates and are pollinators of plants. Sadly over the past 50 years two thirds of moth species studied have decreased in population size and 62 species were lost completely from Britain during the twentieth century. Habitat destruction is thought to be the main cause of these declines and extinctions.