The dry conditions across most of the UK are likely to remain for the next couple of months. Droughts can have a significant detrimental impact on water quality and wildlife, and the more prolonged and intensive the dry conditions are, the worse these impacts can be, say Dr Gwyn Rees and Dr Mike Bowes of the UK Centre for Ecology & Hydrology.

Impacts on land-based wildlife and ecosystems

On land, drought impacts are often clearly visible with parched grasslands, wilting or tinder-dry vegetation and impenetrable, concrete-hard ground. Such conditions can have dire consequences for terrestrial ecosystems and native flora and fauna.

Entire food webs are affected, limiting much-needed nutrition to animals, affecting survival of young offspring and juveniles, and altering adults’ breeding cycles. Migration, temporary loss or, sometimes, permanent extinction of some local species may result, only for them to be replaced in many instances by non-native, invasive species.

Wildfires, which can consume vast swaths of land, become increasingly common, killing countless animals and destroying natural habitats that often are very slow to recover. During subsequent rainfall events, carbon from the charred remains runs off into our rivers and lakes reducing water quality and affecting freshwater ecosystems.

Impacts on freshwater wildlife and ecosystems

As droughts develop, the freshwater environment is increasingly affected. Water levels drop in rivers, lakes, ponds, wetlands and aquifers; in rivers, flows reduce; and the flushing rates in lakes decline. Groundwater-fed streams, such as the chalk streams of southern England, dry up in their upper reaches, creating isolated ponds and fragmenting the ecological connectivity of rivers and streams.

Reduction in river levels reduces the available habitat. For example, features such as riffles and pools, which are important for fish feeding and spawning and provide valuable habitats for amphibians, molluscs and macro-invertebrates, are often eliminated. Natural triggers such as sudden floods that would normally prompt migration or spawning in rivers and wetlands are often missed during unusually prolonged droughts, affecting animal lifecycles over coming seasons or years.

Along the edges of rivers and lakes, habitats also are affected as water levels drop. Tree-cover and vegetation is depleted with an impact on flora and fauna; and freshwater ecosystems are affected by a reduction in shading and cooling effects, which can degrade plant communities and affect fish spawning.

Impact on water quality and pollution

Due to the high population density in many parts of the UK, most major rivers receive large quantities of treated sewage effluent from our cities and towns. The quantities of domestic wastewater discharged to rivers remains relatively stable throughout the year. Therefore, wastewater pollutants, such as phosphates, nitrates, pharmaceuticals and organic chemicals from personal care products, are diluted when river flow is high. 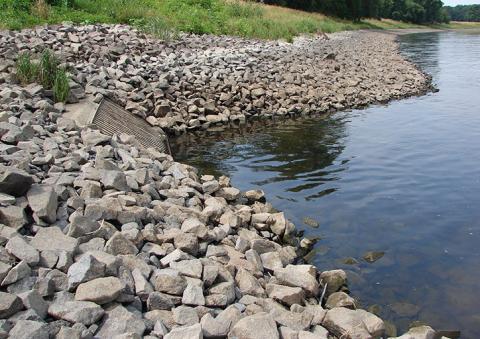 However, as river flows reduce during droughts, these pollutants and nutrients become more concentrated, increasing stress on the freshwater wildlife.

The combination of elevated nutrient concentrations, water temperatures, and sunlight, alongside low river flows, can result in algal blooms which shade out and outcompete submerged aquatic plants. These plants provide valuable habitat for invertebrates and fish fry, and their loss during droughts can have a significant impact on freshwater ecosystems and biodiversity, which will have subsequent impacts on the terrestrial birds and mammals that are dependent on the river.

Fish and aquatic insects depend on adequate dissolved oxygen (DO) concentrations to survive. Oxygen is replenished in the river by gas exchange with the atmosphere. Under drought conditions, river flow speeds and turbulence can greatly decrease, and river stretches can become stagnant, which reduces this gas exchange and can result in low DO levels. Also, as water temperatures increase, the oxygen solubility decreases, which can further reduce DO concentrations.

Conversely, summer droughts often result in excessive algal growth due to low river flows and high sunlight, which increase oxygen concentrations in the water due to photosynthesis. However, when algal blooms terminate, DO concentrations can rapidly fall as the algal biomass is consumed by respiring bacteria, and this can lead to fish kills and localised extinctions of some aquatic species. 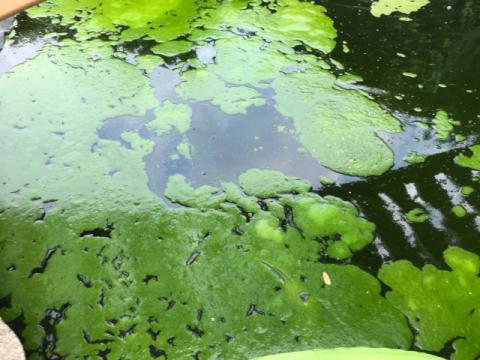 River flow plays an important role in controlling the time that floating algae have to grow and reproduce before being washed out to sea. As river flow decreases, algae have more time to reproduce and multiply, which can lead to algal blooms.

Large algal blooms can be damaging to river ecology, as they increase the cloudiness of the water and smother aquatic plant leaves, cutting out light which can kill the plants. When the bloom ends, the algae are consumed by bacteria, which can cause low oxygen concentrations in the river water, which in turn can result in fish kills.

Droughts greatly affect the timing of algal blooms. Winter droughts can result in spring blooms occurring earlier in the year. Prolonged summer low flows can cause the spring blooms of diatoms and larger algae to end earlier. This is because the flow in the river becomes so low that there is not enough turbulence to keep these algae in suspension. They settle to the bed of the river where they can decay and cause low dissolved oxygen concentrations.

High temperatures and low flows result in changes in the algal community, with the loss of large algae and a proliferation of smaller-celled green algae. These changes in the amount and type of algae, and their timing, can have major impacts on other aquatic organisms including insects, plants and fish that rely on them as the base of the river food web.

Cyanobacteria, also known as blue-green algae, are a natural part of the algal community of rivers and lakes. However, when they occur in large numbers, they can produce high concentrations of toxins that pose health risks to dogs, cattle and even humans.

UKCEH research on the River Thames has shown that cyanobacteria proliferate at high water temperatures and low flows. Therefore, the dangers of cyanobacterial blooms are greatly increased during summer drought periods.

Members of the public can report suspected algal blooms via the Bloomin’ Algae app, which is available free on Google Play and the App store. Further information about blue-green algae and the app can be found on our project page. 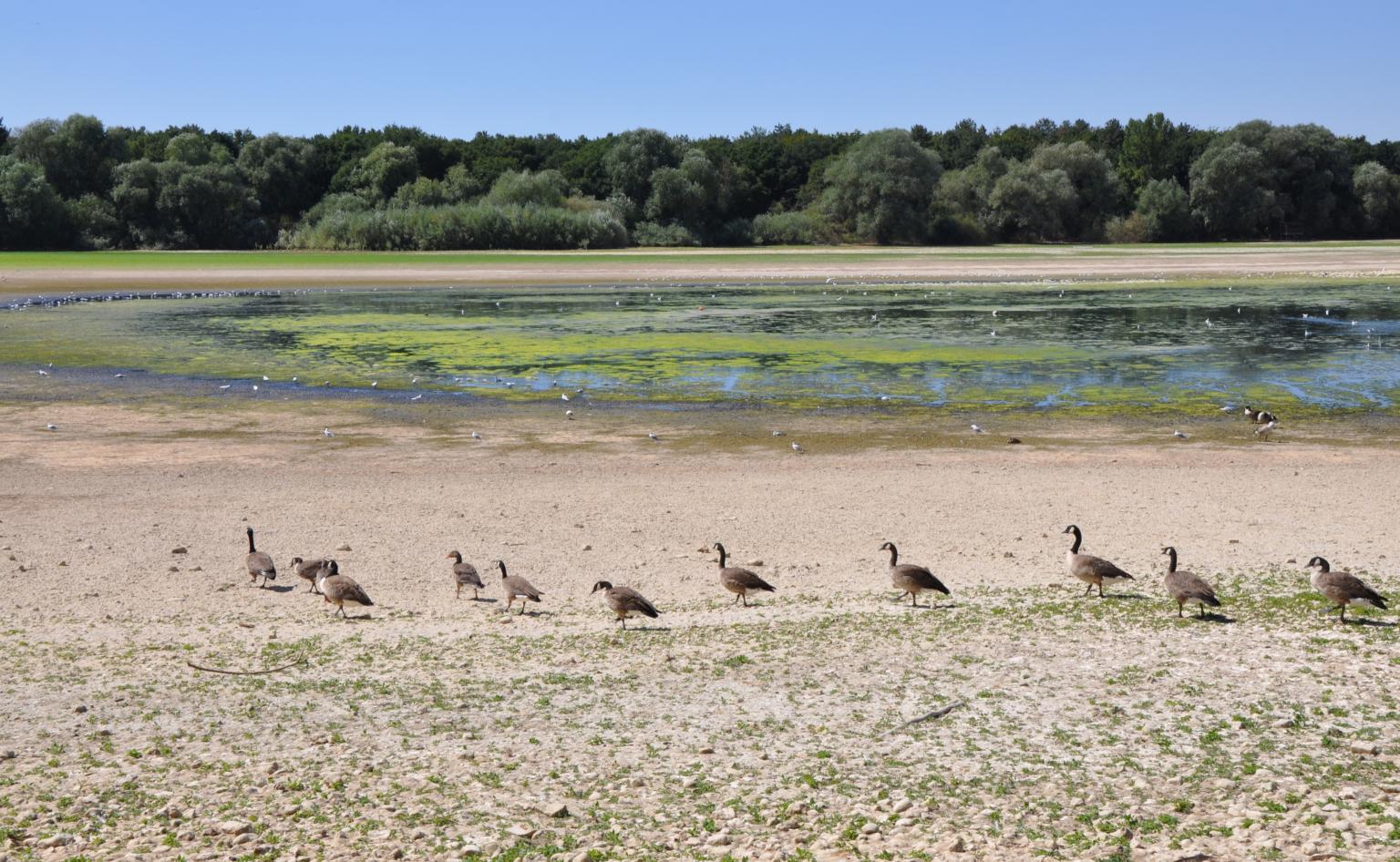