On the fifth anniversary of the launch of the first COSMOS-UK site, Hollie Cooper, a Research Associate at the Centre for Ecology & Hydrology, looks at the origins and growth of our pioneering soil moisture monitoring network.

Chimney Meadows was installed by the Centre for Ecology & Hydrology as the first in a network of environmental monitoring stations that utilise innovative technology to measure large-scale soil moisture.

Traditional soil moisture sensors measure soil moisture in a volume of soil similar in size to a football, whereas the cosmic-ray sensors at COSMOS-UK sites have a sample size, or footprint, approximately equivalent to 12 football pitches.

This new monitoring technology is based on counting neutrons that originate in cosmic-rays, hence the name of the network: ‘Cosmic-ray Soil Moisture observing Network for the UK’ or COSMOS-UK.

The neutron count detected by the sensor is corrected for local meteorological conditions and the background cosmic-ray flux arriving in the Earth’s upper atmosphere, to provide the average volumetric water content in the sensor footprint.

Why is measuring soil moisture important?

This summer has been particularly interesting and unusual as there has been a prolonged spell of very low soil moisture, affecting crop yields. The hot, dry conditions also exacerbated the spread of wildfires in some areas of the UK.

Monitoring the water content of the soil can enable highly-efficient irrigation, providing water when required and eliminating wasteful use. Observing soil moisture variability also increases our knowledge of how the natural environment functions and how it responds to change. The availability of these data can enable improved understanding of the relationship between soil moisture, evaporation, evapotranspiration and local weather systems.

Soil acts as part of a water storage system that regulates the passage of water from rainfall arriving at the land surface to its return to the sea, meaning some rivers continue to flow long after rain has stopped, perhaps for months or even years. Improved knowledge of large-area soil moisture can therefore support flood forecasting and drought monitoring.

Measuring soil moisture and understanding its variability with location and through time is fundamental when exploring potential effects of climate change. This data also helps to project future water availability for agriculture, industry, domestic consumption and the environment.

Since the installation of the Chimney Meadows site, a further 47 COSMOS-UK stations have been installed, from The Lizard in Cornwall to Glensaugh near Aberdeen, and from Morley in Norfolk to Henfaes near Bangor, plus three stations in Northern Ireland. Locations include working farms, agricultural research centres and Sites of Special Scientific Interest.

We therefore have good coverage across the UK, including a variety of land uses and soil types. For example, the Chimney Meadows footprint contains an area of improved grassland.

The black line shows the daily soil moisture, the shaded areas show the monthly minima (pink) and maxima (blue) from the period of record, and the dashed grey line indicates the period of record monthly mean. These extremes and means give some indication of the seasonal variability of the site’s moisture content.

The data shows how soil moisture has varied on both seasonal and annual scales, for example in some winters the soil is significantly wetter, and stays wetter for longer, when compared to other years.

Unfortunately, there is a substantial gap in the record during summer 2014 which was caused by the failure of one of the sensors necessary for processing the neutron counts to water content. Some other small gaps relate to periods of snow or standing water, which results in overestimation of the derived VWC values.

Real-time data from each station allows the COSMOS-UK team to detect faults immediately, while the station’s wide-lens camera enables additional monitoring of local conditions - such as snow at the Chimney Meadows site in March this year, pictured right.

Maintaining the network in order to minimise the loss of data through instrument or communication failure is an ongoing challenge for the COSMOS-UK team.

Faults can rarely be fixed remotely, and while we receive continuing help from numerous site hosts, CEH scientists usually travel to at least three sites per month to fix a range of problems, for example replacing instruments or cables.

Despite inevitable technical issues and an increasing number of stations across the UK, overall data completeness is greater than 90%.

As the period of records extend at the sites, the resource becomes ever more useful, and over the next five years we will be engaging with potential users to best exploit the COSMOS-UK data. 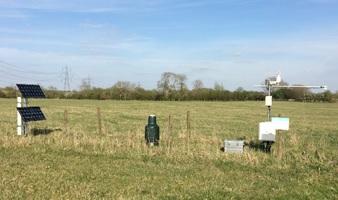 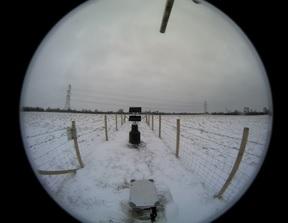