The UKCEH headquarters building in Wallingford, Oxfordshire has a nest box used annually by kestrels (Falco tinnunculus). Since 2015 we have followed progress via live webcams, offering a glimpse into the breeding behaviour of these birds of prey.

Notable dates from the 2021 season

The first egg was laid on 17 April, the earliest laying date (by four days) since we started monitoring the kestrel box. The second egg followed on 19 April; the third egg on 21 April; a fourth egg on 23 April and a fifth egg on 25 April.

The first kestrel chick emerged from its egg on 20 May, the earliest hatching date since we started monitoring in 2015 (with no data for 2020). All five chicks had hatched by 23 May, and all five chicks successfully fledged.

Numbers of kestrels (Falco tinnunculus) have declined in the UK since the 1970s and the species is included on the Amber List of species of conservation concern. UKCEH runs a long-term national monitoring programme, the Predatory Bird Monitoring Scheme, that is investigating contaminant levels across a range of predatory bird species, including Kestrels, across Britain. We are using top predators as a sentinel for wider environmental contamination. Currently, we are looking at pollutants including lead (assessing an industry stewardship scheme related to a UNEP proposal to ban lead shot), atmospheric mercury, and rodenticides.

We also hope you will enjoy seeing the behaviour of kestrels in a nest environment. While these birds are a familiar sight hovering beside hedgerows and roads, our camera offers a glimpse into their breeding behaviour. You can also follow activities on our dedicated Twitter account.

We were unable to run the cameras during 2020 due to site access restrictions during COVID-19 lockdown.

On 17 June, our expert ornithologist and trained bird-ringer Dr Richard Broughton ringed all the chicks.

The Kestrel chicks have been ringed successfully (many thanks to @woodlandbirder) .All chicks looked well, and staff at @CEHScienceNews loved the chance to see them up close pic.twitter.com/9iwAmhyBQJ

Avid viewers will have spotted a new female kestrel this year. The bad weather from the 'Beast from the East' also undoubtedly had an impact on the timing of breeding. The first egg was laid on 12 May; the second on 14 May; the third on 17 May and the fourth on either 19 or 20 May*. The first two chicks hatched on 12 June and the third hatched on 14 June. The fourth egg failed to hatch. The three remaining chicks successfully fledged by mid-July, in the midst of a heatwave!

One of the last views of our @CEHBirdCam Kestrels, now all 3 fledged & branching/roosting in nest tree. Successful year but dominated by extreme weather: nesting delayed 2 weeks by Beast From The East, then born into a heatwave: these 32-day-old birds have never seen rain @_BTO pic.twitter.com/bVOefBNexL

Our nest box was again used by a pair of breeding kestrels in 2017. The first egg was laid on 22 April and the fifth on 2 May. The first two kestrel chicks hatched on 25 and 26 May 2017. All five chicks had hatched by 29 May. The five chicks had begun venturing from the box by 25 June 2017 and all had more or less fledged by 27 June. 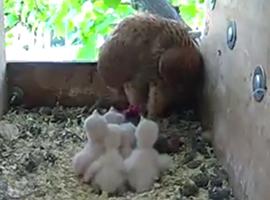 On 28 June, the surviving four chicks were ringed by trained and licensed members of staff. No harm came to the birds during the process. Bird-ringing is important as this allows us to monitor the population across the country –about 2000 Kestrel chicks are ringed in Britain each year – and this gives us scientific information about their survival and movements which helps us understand how their populations ‘work’, and what may be causing their decline.

On 5 July, the kestrel chicks began making their first forays outside the box and made increasingly fewer visits to the box over the next few days. By 11 July they were no longer even returning to sleep at night. 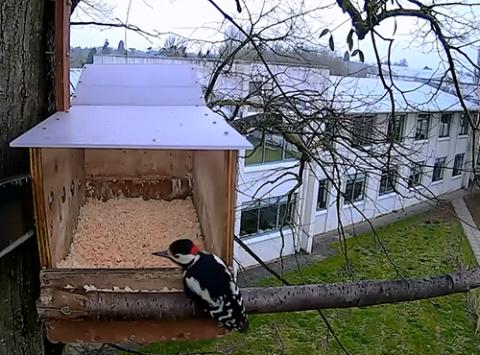 Other visitors including a great spotted woodpecker (above) and a squirrel have been seen investigating the box.

Laying occurred in late April to early May (five eggs in total), hatching began on 27 May and all chicks hatched by 29 May. Unfortunately all chicks died before fledging. See below for a playlist of videos from the nest cam:

Kestrel numbers have declined since the 1970s and the species is included on the Amber List. UKCEH researchers run a long-term national monitoring programme that is investigating contaminant levels across a range of predatory bird species (including Kestrels) across Britain. Find out more about the Predatory Bird Monitoring Scheme.