Loweswater is a small lake, 1.6km long, 0.5km wide, on the north-west edge of the Lake District National Park. It has an average depth of 8.4m and a maximum depth of 16m. It lies in a mainly agricultural catchment that is managed by nine farmers and the National Trust, formerly under the Environmentally Sensitive Area (ESA) scheme.

Extensive algal blooms and eutrophication have plagued Loweswater in recent years due to the high phosphorus (P) load from the surrounding area. In two projects funded by the NERC RELU (Rural Economy and Land Use) programme, the local community came together with scientists from CEH, sociologists from Lancaster University and national stakeholders to form a Loweswater Care Project to help manage the catchment and reach the Environmental Agency’s target of “good ecological status” by 2027. As part of this project, CEH used a series of linked models to forecast the impacts of catchment management scenarios on the potential achievement of "good ecological status".

There is evidence of decreasing water quality and substantial oxygen depletion in the bottom waters of the lake. These are caused by an increased frequency and intensity of algal blooms that are dominated by potentially toxic cyanobacteria. Farming practices were highlighted as a possible cause of an increase in the P concentrations and phytoplankton abundance in the lake.

Local farmers formed the “Loweswater Improvement Project” (2002-2007) to investigate ways of minimising their impact on the lake. This led to a detailed scientific assessment of the catchment and practical improvements in waste management and farming practices. The Loweswater Care Project, which started in 2007, created a forum that allowed farmers, members from the local community, academics from CEH and Lancaster University, and other stakeholders to come together and make decisions on how to manage the catchment in a better way. Research by Norton et al (2011) enabled the local community to identify farms that were losing excessive amounts of P as runoff and to implement new farming practices to reduce losses. These included better targeting of fertiliser applications in response to soil test results.

The remediation work has been continued by the local community - called the Loweswater Care Partnership, now part of the West Cumbria Rivers Trust.

Long-term changes in Loweswater were assessed from multiple fish surveys and samples taken four times a year in 1984, 1991, 1994, 2000, 2005 and 2010, as part of the Lakes Tour project. This was supplemented by monthly data collected by the RELU project. The data provide clear evidence of increased eutrophication caused by increased inputs of P to the lake.

Nutrient loads to the lake were estimated in a number of ways: direct measurement, export coefficient modelling and using the farm model, PLANET. The Generalised Watershed Loading Function model converted these annual loads to daily loads and these fed into the algal model, PROTECH. The chained models forecast the effects of different land management scenarios on the lake in terms of algal and cyanobacterial abundance, providing a useful tool with which to evaluate the effectiveness of different remediation measures in moving towards Water Framework Directive (WFD) requirements for "good ecological status".

Results from the linked model runs provided the Loweswater community with information about current nutrient sources and an options appraisal for reducing nutrient loading to meet WFD chlorophyll a targets and comply with World Health Organisation (WHO) guidance on low risk levels of cyanobacteria. Results indicated that a large proportion of the P load to the lake was driven by agricultural practices on a single farm, including fertiliser applications and livestock impacts on soil losses. Most other farms were operating at a P deficit. Other sources of P included septic tank discharges.

Modelling results indicated that current P inputs to the lake would have to be halved to achieve WFD "good ecological status". Of the scenarios tested, it was shown that replacing agricultural activity with natural grassland or deciduous woodland would achieve the required reduction in P loading. In contrast, shifts in livestock type towards "all sheep", or by doubling the number of cattle and halving the number of sheep, both resulted in an increase in P loading to the lake.

This study highlighted the best scenarios for management and provided the evidence required to underpin effective catchment management at the site. Fertiliser application rates were quickly reduced on the farm running a P surplus. However, as a result of the potentially negative socio-economic impacts, the further significant reductions in agricultural practices necessary that would be necessary to achieve WFD "good ecological status" in the lake appear to be unsustainable. Instead, the community will focus on reducing nutrient laden discharges from septic tanks as a more realistic option for the control of nutrient load. 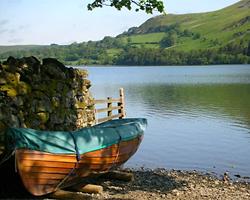 A boat by Loweswater, photo by Ian Winfield