Linlithgow Loch is a shallow freshwater lake in West Lothian, Scotland. It has a mean depth of 2.3m and a maximum depth of 9.2m (SNH 2008). It was designated a Site of Special Scientific Interest (SSSI) in 1984 because it is the only lowland mesotrophic loch in West Lothian. Its botanical and ornithological interests also contributed to its SSSI status (SNH 2000). In 2008, the status of Linlithgow Loch was revised from mesotrophic to eutrophic and the ornithological interests were removed as a characteristic attribute of the site.

The loch supports a range of local activities and business interests, including water sports and fishing. It lies within the Linlithgow Palace and grounds, which are managed by Historic Scotland. In recent years, all these interests have been threatened by cyanobacterial blooms and the native macrophyte community has now been assessed as being in unfavourable condition.

Linlithgow Loch has a long and well-documented history of cultural eutrophication, with cyanobacterial blooms causing significant deterioration in the recreational and conservation value of the loch. The dominant sources of phosphorus (P) and nitrogen (N) within the catchment are agriculture and septic tank effluent. The release of legacy P from the loch bed sediments results in very high soluble reactive phosphorus (SRP) concentrations (around 200-300µg SRP l-1) in summer. Nitrogen limitation of phytoplankton is apparent during summer/autumn, which reduces the risk of cyanobacterial blooms during this period. Sediment P release events are often capable of supporting up to twice the phytoplankton biomass that is currently recorded in the summer/autumn. Although cyanobacterial biomass appears to be kept in check by N limitation, high magnitude blooms have been reported in recent years, probably as a result of high N loading from the catchment. So, it is important to further identify and control N and P inputs to the loch, especially during high-risk months in summer and autumn. Specific N and P sources have been identified within the catchment, including runoff from agricultural land, septic tanks and foul drainage.

CEH held a seminar in 2011 at which the group agreed to:

The results of assessment of long-term changes in water quality indicators and key ecological elements are outlined below.

Nutrients and phytoplankton: Long-term (1981-2010) water quality data from the outflow were provided by SEPA and assumed to represent in-loch conditions. These data indicated failure in relation to the total phosphorus (TP) target of 35-50µg P l-1 and the chlorophyll a target of 15-20µg l-1 over the period 2005-2009. Deteriorating trends were observed in both of these variables, especially in spring and autumn between 2006 and 2009. The seasonality of TP and SRP, dissolved inorganic nitrogen (DIN) and chlorophyll a concentrations was assessed across the data range in Linlithgow Loch. The analyses suggested that in-lake processes reduced DIN concentrations and increased SRP concentrations in the water column in summer, leading to an apparent switch between P limitation of phytoplankton in winter and spring, and N limitation in summer and autumn. As a result, the risk of cyanobacterial blooms has increased in recent years as a result of increased P concentrations.

Macrophytes: Although the macrophyte community has generally improved since the 1950s, the community was classified as "unfavourable" in 2004 and 2007 when assessed using common standard monitoring methods outlined by the Joint Nature Conservancy Council (JNCC). In particular, it was found that the macrophyte community had a low diversity of characteristic species (only five out of a minimum of six characteristic species required for "favourable" status) and was under threat from the non-native species Elodea nuttallii and Elodea canadensis, although the latter was not recorded in the most recent (2007) survey. It was recommended that the extent of the invasive species should be fully mapped prior to designing biodiversity management measures, which may include species transplant and removal.

Waterfowl: Although there are no targets for waterfowl that are relevant to Linlithgow Loch, the consistently decreasing trends in mallard, great crested grebe and little grebe, observed between 1995 and 2009, are a concern. Few data were available to enable the main drivers (ie local versus national-scale environmental change) of waterfowl trends to be identified. The number of "listed" species recorded in each winter count period (i.e. those that are listed under the European Bird Directive 2009/147/EC) generally increased from around six in the early 1960s to 10 to 16 in the late 2000s. Of the 38 species recorded at Linlithgow Loch between 1961 and 2009, 29 are listed under the Birds Directive. It was recommended that relationships between water quality, macrophyte community cover and composition, and behaviour of waterfowl species in decline should be assessed at Linlithgow Loch in a follow-up study to underpin the design of biodiversity management measures. 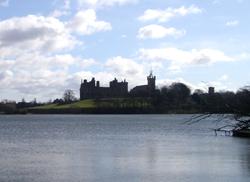 Weeds near outflow on Linlithgow loch 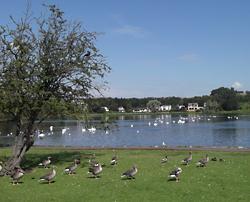 Waterfowl by Linlithgow loch on a sunny day