Kinghorn Loch is a shallow lake (surface area 11.3ha, maximum depth 12m) in Fife, Scotland. The loch is used for water sports and coarse fishing. In the early 1980s, it had been heavily polluted by "red mud" leachate for about 30 years. This resulted in massive fish kills and had a severe impact on the macrophyte and macroinvertebrate communities of the loch. In collaboration with the Scottish Environment Protection Agency (SEPA), the Kinghorn Loch Users Group, the Scottish Carp Group and Edinburgh University, CEH is leading an investigation into the chemical and ecological recovery of the loch over a 30-year period following pollution control.

Red mud is a waste product from dressing bauxite by the Bayer process during the production of alumina. The solid phase consists mainly of clay solids that are high in iron and aluminium content, and an aqueous phase comprising alkali (at about pH13) that is not removed during the washing process. It is this aqueous phase that contains many dissolved constituents that may represent a risk to both humans and the environment. At Kinghorn Loch, red mud was stored in an upstream landfill site from the 1940s onwards. An assessment of the leachate entering the loch from the landfill site was conducted in the 1980s. The results showed that this leachate was causing elevated concentrations of arsenic (As), vanadium (V), aluminium (Al), phosphorus (P) and pH, which reached a peak between 1981-1983.

To reduce contamination of Kinghorn Loch, the red mud leachate was diverted in 1983 and some red mud solids were removed from the loch. The loch was then allowed to recover naturally from 1983 onwards.

Samples were collected (typically monthly) from the loch outflow and analysed for the chemical constituents of red mud. SEPA has continued this monitoring, resulting in one of the world's longest datasets tracking the recovery of a shallow lake from red mud pollution. CEH has assessed the recovery trajectories of pH, total As, total V and total AI following leachate diversion.

Kinghorn Loch now supports a diverse range of aquatic plants, macroinvertebrates, phytoplankton and zooplankton. It is also used as a recreational carp fishery. The project continues to characterise the ecological and chemical responses to restoration at this site. 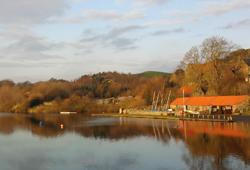