Changes in the Indian Summer Monsoon and Agriculture in Sundarbans

The Sundarbans extends over the Indian state of West Bengal and neighbouring Bangladesh (Fig. 1). This region, at the confluence of the Ganges, Brahmaputra and Meghna Rivers in the Bay of Bengal, is the largest prograding delta and tidal mangrove forest in the world (Rogers and Goodbred, 2014). About 40% of the 10,000 km2 of the Sundarbans mangrove forest lies in India, while the rest is in Bangladesh. Water bodies, including canals, rivers and streams ranging in width from a few metres to several kilometres, occupy the Indian part of Sundarbans. The mangrove forest extends over 200 islands, separated by 400 interconnected networks of tidal waterways and 15 major rivers. In the Indian part of Sundarbans, there are a total of 19 community development blocks of which six are under the North 24 Parganas and 13 under the South 24 Parganas districts (Dasgupta and Shaw, 2015), in addition to a National Park, reserve forest and wildlife sanctuary area (Fig. 1).

Recognising the uniqueness and importance of this mangrove region, notably as a nursery for marine organisms and as a buffer zone against cyclones (Sakib et al., 2015), to the city of Kolkata, the United Nations Educational, Scientific and Cultural Organization (UNESCO) declared the Indian portion of the Sundarbans forest a natural World Heritage site in 1987 (UNESCO World Heritage Conservation, https://whc.unesco.org/en/list/452, accessed on August 28 2019). Sundarbans also became part of the Man and Biosphere Program of UNESCO by being included in the Global Network of Island and Coastal Biosphere Reserves (Sánchez-Triana et al. 2014). Figure 2 provides a glimpse of the density of the forest and the water landscapes of the region. 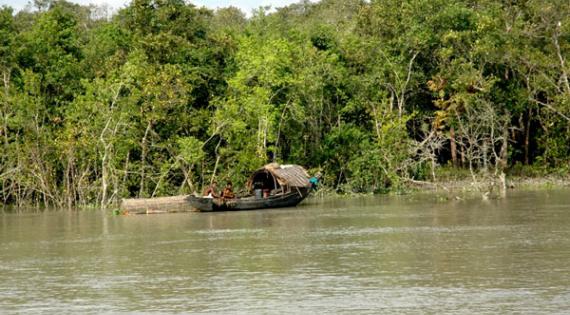 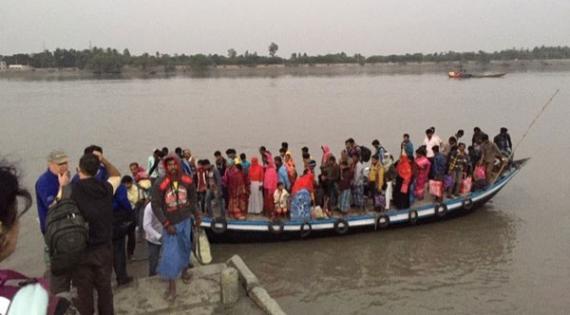 Environmental changes and agriculture in Sundarbans

The coastal region of Sundarbans is fertile, but highly vulnerable to natural and human-made hazards (IPCC, 2007). Over the past century, cyclones, sea level rise, increased salinity, reduced freshwater supply, embankment deterioration, to name a few, have taken their toll on human life and property, and for this reason, Sundarbans is considered to be one of the most hazardous areas of the Indian subcontinent (IPCC, 2007). For instance, Cyclone Sidr in 2007 and Cyclone Aila in 2009 caused widespread damage and casualties in the Sundarbans region of both India and Bangladesh (Debnath, 2013; Paul, 2009).

Salinity is a major problem in Sundarbans and has a significant negative impact on agricultural productivity. Rice is the main crop in the region (Fig. 3), and to cultivate it the acceptable salinity limit is 4-6 parts per thousand (ppt), but subsequent to Cyclone Aila salinity levels of up to 8 ppt were recorded in the northern part of Sundarbans and up to 20 ppt in the southern region (SánchezTriana et al., 2014). Figure 4 shows temporal variability in salinity trends in the region. The western and eastern parts of Sundarbans have experienced decreasing trends in salinity during the period 1989-2012, while it has increased during the same time period in the central region. The salinity level is heavily influenced by freshwater supply, as well as saltwater intrusion from the Bay of Bengal (Banerjee, 2013).

Cropping intensity, defined as the number of crops that are harvested in a year from a given piece of land, is significantly lower in Sundarbans than the average for the State of West Bengal as a whole (Fig. 5), with issue related to salinity, land contamination and lack of water availability mentioned as potential causes for this pattern on the basis of interactions with farmers in July and August 2019 in different blocks of Sundarbans. 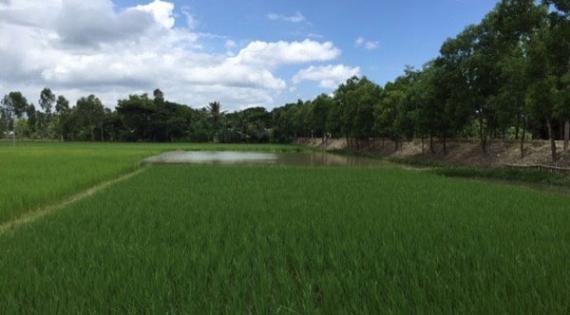 Fig 3 Rice field in Sundarbans. Photos taken by the authors in July 2019. 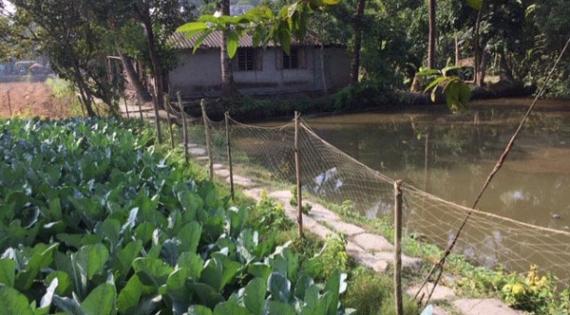 Crop production depends on freshwater availability, with rainfall during the annual summer monsoon contributing the most to the freshwater supply. Freshwater availability is a major problem in the region due to the highly seasonal distribution of rainfall. Communities in Sundarbans have adapted to the temporal distribution of rainfall by storing water in ponds and using that stored water for cleaning, bathing and irrigating crops beyond the monsoon season. Figure 3, for instance, shows a vegetable field with a household water storage pond adjacent to a residential dwelling. Agriculture also takes place in other seasons, but given that rainfall is limited in seasons other than the monsoon, it relies on irrigation using the groundwater supply. Interviews with community stakeholders during the field visits mentioned above, revealed that the increasing use in groundwater abstraction for irrigation has resulted in the lowering of the water table and the drying of wells in some regions, affecting domestic water availability, and thus the need for the installation of new, deeper wells. Farmers have also experienced changes during the monsoon season, such as a delay in the occurrence of the monsoon and an intensification of the monsoonal rains, with negative impacts on agriculture. Hence improved weather forecasting, mainly rainfall forecasts, and forecasts of freshwater availability at different time-scales could help the agricultural sector mitigate against potential risks through proactive adaptation.

The provision of agro-meteorological services is one way to increase agricultural productivity. However, such services focus on the short and medium term climate forecasts, e.g. weather forecasting and seasonal forecasting, respectively, and do not yet provide information on long-term climate change. The latter is important as some physical adaptation strategies do take time to be implemented in practice, e.g. increasing size of water storage reservoirs, notwithstanding the potential for technological, managerial and behavioural adaptation.

Knowledge of climate change impacts in the region is limited and a better understanding of how the monsoon is projected to change in the future (amount of precipitation and its distribution) and the impact of such a change on freshwater availability in the future would provide important benefits to the communities of Sundarbans, whose livelihoods depends mainly on rain-fed agriculture, albeit supplemented through unsustainable abstraction of the groundwater resource for irrigation.

This project examines how climatic changes have affected communities living in four blocks of the Sundarbans region and discusses issues related to adaptation to those changes through various engagement strategies (e.g. interviews, site visits, focus groups) with farmers and other key stakeholders involved in water management and agriculture. The stakeholders’ perceptions are also put in the context of past changes in rainfall and freshwater availability through an analysis of observational and reanalysis 1 climatic datasets. The project then investigates how the climate of the region is projected to change in the future and the consequences of changes in the monsoon on surface water availability. This task is realised by first ranking the General Circulation Models (GCMs) available through the Coupled Model Intercomparison Project Phase 5 (CMIP5) on the basis of their ability to simulate the regional climate of Sundarbans. The outputs from the best GCMs are then downscaled and used to develop regional scenarios of surface freshwater availability. The implications of the latter on people’s livelihoods are discussed and will help in the development of a policy brief on the needs for adaptation and the research required to increase community resilience.

This work is part of the IUKWC Pump Priming Projects initiative that is designed to initiate further future collaboration; assess the needs of the community for other directed activities; develop new means of communicating joint research results; assess the state of knowledge and/or conduct proof-of-concept pilot studies.

1 Reanalysis is a scientific method combining observational datasets and model simulations to develop time series of how the climate has changed in the past.