Haweswater is a reservoir in the Mardale valley in Cumbria. It was formed in the 1940s when a dam was built to merge the two original lakes: Low Water and High Water. The water rose 28.9m, submerging the vacated village of Mardale. Haweswater itself is 6.4km long and 0.8km wide, with a maximum depth of 61m, making it one of England’s largest lakes. There are no villages on its shores but it is home to a number of fish species including the protected schelly (Coregonus lavaretus, "schelly" in England, "powan" in Scotland, "gwyniad" in Wales), arctic charr, brown trout and perch. Cormorants are also found along its waters.

The population of schelly in Haweswater has declined in the last 30 years as a result of variations in the water levels and predation by fish-eating birds. Schelly require large, deep lakes with clear, well-oxygenated water. Since the damming of Haweswater, monthly water level variations have been high. Large variations occurred between the 1960s and mid-1990s, particularly during the critical spawning and egg incubation period (approximately February to April), as a result of the lake being managed as a drinking water supply. The schelly population (estimated using entrapment) declined from 200-550 individuals in the early 1970s to less than 100 individuals in the late 1980s and early 1990s, and less than 20 individuals since the late 1990s.

Other factors potentially impacting on the schelly include (1) droughts, which in recent years have reduced the water level by as much as 60%, and (2) predation by cormorants (Phalacrocorax carbo).

To redress the deterioration of the schelly population several conservation measures were instigated at Haweswater. These include the development of an artificial spawning substratum system, a more sympathetic lake level management regime, and attempts to establish two new refuge populations of schelly from Haweswaster in nearby Blea Water and Small Water through the introduction of schelly eggs in early 1997. In addition, bird scarers were put in place by United Utilities in 1999 and 2000, and from 2002 to 2004, to discourage further nesting by cormorants. Limited shooting was carried out between 2004 and 2006, resulting in 29 cormorants being shot over the three years. A small amount of shooting was performed in 2007, although no birds were actually shot, and in subsequent years no further shooting took place because of the much lower numbers of cormorants present. This management action was not undertaken lightly, but done so on the basis of an overall consideration of conservation issues at Haweswater. A considered discussion of this sensitive issue, including its wider conservation implications in the English Lake District, is given by Winfield et al (2003).

CEH has been monitoring population changes in schelly using entrapment and hydroacoustic surveys since 1997. Trapped fish are transported to the laboratory and identified, aged, measured, weighed, and classified according to their reproductive state. Cormorant abundance and feeding behaviour have also been recorded to determine their impact on the schelly population.

Local cormorant feeding behaviour declined by 75% between 1997 (ie unmanaged population) and 2007. However, in 2010, estimates of cormorant feeding intensity had increased to 45% of the estimates in 1997. Although only one schelly was entrapped between April 2010 and March 2011, this result indicates the population is still extant and provides evidence of recovery potential in Haweswater. Modelling of the schelly population suggested that the current level of predation of these fish by cormorant may limit their capacity for recovery. 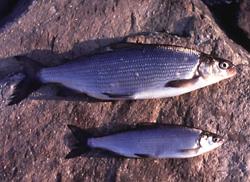