More than 100 dead puffins have washed up across the northeast coast of Scotland, Orkney and Shetland over the past three weeks, making it one of the most significant reports of its kind in the UK for this time of year in the past 50 years.

The cases are being recorded by the UK Centre for Ecology & Hydrology (UKCEH), which carries out long-term monitoring studies to detect the effects of environmental change on UK seabird populations.

Dr Francis Daunt, seabird ecologist at UKCEH, said: “This is one of the most significant puffin ‘wrecks’ we’ve seen for this time of year since we began studying these fascinating seabirds almost 50 years ago. Many of the people who have found the birds say they are emaciated, which suggests there could be a problem within the birds' food supply.”

Some of the birds found washed up in Orkney are adults, so there is a concern that this will have a negative effect on next year’s breeding numbers.

Earlier this year in the autumn, several thousand guillemots and razorbills were found dead along the east coast of Great Britain but it is not yet known if this occurrence is linked.

UKCEH is working with the Marine Scotland directorate of Scottish Government, Plymouth Marine Laboratory, Edinburgh University, Centre for Environment, Fisheries and Aquaculture, Natural England and DEFRA to investigate these earlier seabird deaths. Over 100 of the guillemots and razorbills have been tested for avian flu, with all tests coming back negative. The continued investigation is now focusing on two possible explanations: a significant failure of the marine food supply or toxic poisoning from algal blooms, as well as potentially a combination of both*.

Dr Francis Daunt, continued: “It is worrying to now see puffins also washing up dead and sick. We hope to be able to carry out post mortems on them as well.”

Due to the complex and varied nature of the investigation into these rare events, results are not likely to be available until early next year.

Anyone who spots a dead puffin and is able to safely take a photograph of it (please do not touch it), showing the whole bird with a clear view of its beak and wings, can send it to UKCEH via enquiries@ceh.ac.uk. If you see birds that are alive but sick, please contact the SSPCA or the RSPCA.

More on the two possible explanations for the earlier seabird deaths:

*The first line of inquiry involves research into whether there was a reduction in food, or in the quality of food within the marine environment, in the North Sea in the weeks leading up to the deaths. This could be caused by the unusually warm water temperature in early September.

The second strand involves investigating the possible role of toxins, which can fatally poison seabirds or affect their behaviour in such a way that it affects their feeding habitats, functions and general health, which can also lead to death.

About seabird monitoring at UKCEH

UKCEH monitors seabird population dynamics it is a highly useful indicator of the health of marine ecosystems and environmental change. For example, analysis of data from the Isle of May confirmed that numbers of black-legged kittiwakes have declined by more than half since 1990 and linked this decline to ongoing climate change. The UK holds internationally important breeding populations of many species of seabirds, and therefore has an obligation to keep an eye on their well-being.

For more information on UKCEH’s scientific work with seabirds see the ‘Isle of May Long-Term Study’ webpage.

The UK Centre for Ecology & Hydrology is a centre for excellence in environmental science across water, land and air. Our 500 scientists work to understand the environment, how it sustains life and the human impact on it – so that together, people and nature can prosper. 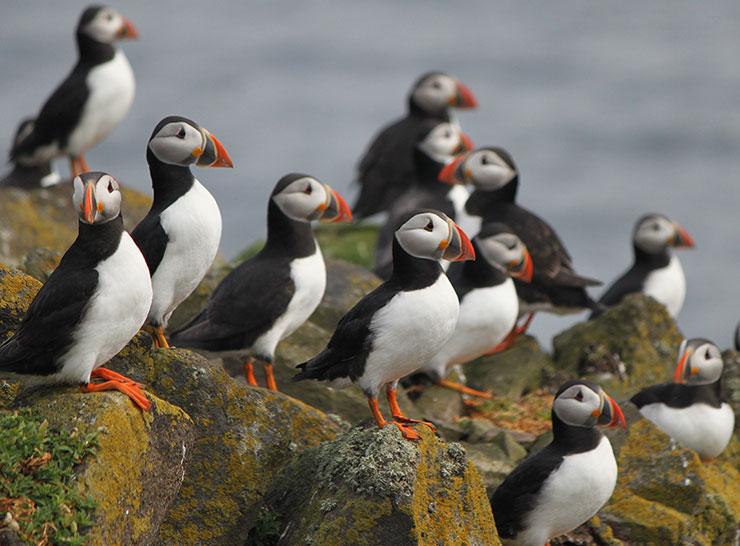