Coldingham Loch is a shallow reservoir (surface area 8ha, mean depth c.2.9m, maximum depth 12.3m) in Berwickshire, Scotland. The loch experienced severe cyanobacterial blooms and low dissolved oxygen (DO) concentrations during periods of summer stagnation during the late 1970s and early 1980s. This threatened the financial stability of the recreational fishery, which was being stocked with brown and rainbow trout.

CEH investigated the causes of these water quality problems and conducted a controlled experiment to assess the benefits of aeration as a means of reducing cyanobacterial blooms.

Initial site surveys showed significant thermal stratification of the water column in July and August. Bottom water DO concentrations of less than 10% were recorded in the deep basins during this period, with significant amounts of soluble reactive phosphorus (SRP) being released from the sediments (8.7mg m2 d-1) and nitrate concentrations being reduced to limiting levels (107mg m2 d-1) through microbial denitrification processes. These factors combined to produce stagnant, nitrogen limited conditions under which the cyanobacteria Aphanizomenon flos aquae Morr. ex Born, et Flah. dominated the phytoplankton community.

A land-based air compressor was connected to a submerged (deepest point in loch) air injection "bubble-gun" device by a 150m length of 3.8cm bore polyethylene pipe. This provided a means of disrupting temperature and DO stratification. The system was operated continuously during the periods when the loch would have stratified under natural conditions, ie May-September, in 1984 and 1985.

Samples were collected (typically monthly) for the analysis of phytoplankton biomass and community composition, and water chemistry. Depth profiles of temperature and DO, and measurements of water clarity, were also carried out. Sampling began twelve months before the installation of the aeration system and continued for two years afterwards.

Temperature and DO stratification were disrupted when the aeration system was in operation, in both years. However, SRP release from the sediments was not significantly reduced during these periods. Surface blooms of Aphanizomenon sp. were significantly reduced as a result of this artificially induced turbulence, with filament abundance in 1984 and 1985 (17 and 52 filaments ml-1, respectively) being much lower than in 1983 (630ml-1). Peak summer chlorophyll a concentrations were lower in 1984 (20µg l-1) and 1985 (13µg l-1) compared to 1983 (40µg l-1). Secchi depth transparency increased in 1984 (~3m depth) and 1985 (>3m) compared to 1983 (<1.5m). Continuous water circulation lowered the risk of fish kills and greatly increased the habitat available for fish; previously, they had been excluded from the anoxic hypolimnion. 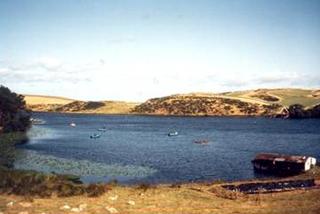