Pollination supports 88% of flowering plants and 35% of global crop production, which is worth €14.6bn per annum to Europe. However, the provision of pollination as a natural ecosystem service is threatened by declines across many insect pollinator groups, attributable to habitat loss, agricultural practices and climate change.

Working with governments, industry and volunteer citizen scientists, UKCEH has led insect pollinator research in the UK including large-scale field studies. Data are collected through the Biological Records Centre (BRC), which collates the observations of citizen science volunteers across the UK and through national-scale surveys. UKCEH analysis of these biological records has revealed and quantified trends in pollinator populations.

Impacts of neonicotinoids on honeybees and wild bees

Neonicotinoids represented an economically significant pesticide group, but early research suggested a negative impact on bees when they were used on flowering crops. Concern about this led to an EU moratorium on their use. In 2016, UKCEH provided the first analysis to identify how long-term exposure to these pesticides (1994–2010) led to national-scale trends in the loss of wild bee populations that fed on treated crops.

UKCEH also undertook the first multi-country farm-scale evaluation under commercial agricultural conditions to identify the impacts of these pesticides on honeybees, bumblebees, and solitary bees. This revealed that neonicotinoid pesticides reduce overwintering success and colony reproduction in both honeybees and wild bees, evidence that contributed to a subsequent ban on their use in the EU.

Building on the pollinator records work, UKCEH established the Pollinator Monitoring and Research Partnership (PMRP) in 2015, which aims to determine how insect pollinator populations are changing across Great Britain. UKCEH has established two new large-scale pollinator surveys under the UK Pollinator Monitoring Scheme banner (PoMS) that build on and enhance existing recording schemes for pollinating insects. PoMS is currently the only scheme in the world generating systematic data on the abundance of bees, hoverflies and other flower-visiting insects at a national scale.

UKCEH has helped to develop robust metrics of insect pollinator communities for UK government agencies: both the status (e.g. in the Red Data Book that gives information about species on the verge of extinction) and national trends over time in species occurrence.

UKCEH’s work has fed into national, multi-national and global assessments and policy. In the UK and EU, the work on neonicotinoid pesticides directly informed the recommendation to the European Food Standards Agency to withdraw them from use.

The UK Government’s 25-Year Environment Plan identifies comprehensive and long-term targets for a cleaner, greener country within a generation. Development of the plan depended on the State of

Nature report co-authored by UKCEH. Improvement will be measured by a series of indicators and UKCEH pollinator data, analysis and trends have helped to determine both the possible indicators for the ‘Status indicators of pollinating insects’ and also the baseline by which the improvement will be judged.

There are separate pollinator strategies for the nations within the UK. As a fundamental component of all these strategies, UKCEH has designed and delivered the UK Pollinator Monitoring Scheme. This is supported by Defra and the Welsh and Scottish Governments and is helping to deliver the National Pollinator Strategies for each country.

We published a guide for farmers and land managers, ‘Habitat Creation and Management for Pollinators’ in 2016, the distillation of a 20-year research partnership between Marek Nowakowski - a practitioner with a passion for wildlife conservation on farmland - and UKCEH applied ecologists. It gives the best available advice on creating and managing habitats for bees on farmland.

“In combination with the observation of widespread and increasing use of these chemicals, the available evidence justifies taking further steps to restrict the use of neonicotinoids!”
Defra’s Chief Scientific Adviser

“The Pollinator Monitoring Scheme is presented by Defra as an exemplary wildlife monitoring scheme which trains and utilises community scientists, and produces a globally unique systematic data set. This scheme fulfils several priority actions in the National Pollinator Strategy under the key area – ‘Improving evidence on the status of pollinators and the service they provide’”
Science Advisors, Defra 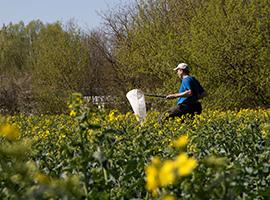