Flood risk to people, buildings and businesses is predicted to rise in coming years, with a significant impact on health, safety and the economy. Climate change will mean more frequent and extreme events, so flood management, and the methods developed to support it, will need to respond to unprecedented change. Developing more efficient and accurate flood forecasting models is therefore a priority.

Between 2016 and 2021 the UK will have invested £2.6 billion in flood defences protecting hundreds of thousands of homes and this amount will double between 2021 and 2027. One challenge is to design and select flood defence schemes that provide optimum protection. Together with appropriate flood forecasting methods, such schemes can maximise the warning, giving enough lead-time to take action before floods occur.

The UK’s standard methods for calculating flood and rainfall risk were developed at UKCEH and are constantly updated with the latest data and methodological developments and can be applied at any point on the UK river network. The national peak flows dataset, underpinning the application of FEH methods, is updated annually by UKCEH through its National River Flow Archive in partnership with the UK Measuring Authorities. The FEH includes a model for estimating how likely extreme rainfall events are to occur across the UK. This model can estimate storm frequency for durations ranging from less than 1 hour to several days and return periods from 12 months to over 10,000 years.

The Flood Forecasting Centre (FFC) is a partnership between the Environment Agency and the Met Office to forecast all natural forms of flooding. UKCEH’s Grid-to-Grid model sits at the heart of the FFC, translating rainfall into river flows to predict potential river flooding. UKCEH has built on this in partnership with the FFC and other collaborators to develop the Surface Water Flooding Hazard Impact Model, a new method of real-time forecasting of surface water flood impact.

The UK is now better prepared for flood events, with more people protected and more communities given warning earlier. The FEH alone has been estimated to save up to £31 million per annum. The flood risk maps produced using FEH data mean that insurance companies have a better understanding of property flood risks and can more precisely offer products to their customers.

FEH methods have also influenced guidance, improving safety and efficiency across the construction and water management sectors. They are recommended in the Construction Industry Research and Information Association (CIRIA) sustainable drainage system manual. The latest FEH rainfall model has been formally adopted by OFWAT as their method of assessing the severity of storm events.

The new Surface Water Flooding Hazard Impact Model (SWFHIM) approach builds on initial city-scale applications for the 2014 Glasgow Commonwealth Games. These notably allowed assessment of risk during the men’s cycling road race when heavy rainfall led to surface water on the roads. The SWFHIM was then developed and trialled for country-wide application across England and Wales and subsequently incorporated into FFC operational systems in 2020.

“The Met Office estimates that up to 10% of the damage caused by flooding can be avoided through early warnings provided by NERC models such as the grid-to-grid model developed by UKCEH. On an average year this could prevent up to £127m in damages to homes, buildings, farmland and infrastructure.”
Independent assessment of the impacts of NERC research activities

“This data has provided us with a step-change in the way that we underwrite flood risk in the UK. Visualisation and analysis of flood risk at the individual address level is now a much easier, quicker, and more precise process for us.”
Chubb Insurance on Ambiental’s UK FloodMap4™

“The ground-breaking capabilities developed by SEPA to alert for surface water flooding was an essential part of our contingency planning during the Commonwealth Games.”
Scottish Environment Minister 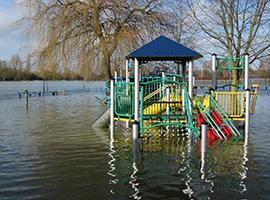 Winter flooding on the River Thames, 2014