Bassenthwaite Lake is one of the largest and shallowest in Cumbria, covering an area of 530ha, with a maximum depth of 21m. It receives water and material from a catchment of about 350km2 and has a short retention time of 19 days. Bassenthwaite Lake is a National Nature Reserve (NNR) and a Site of Special Scientific Interest (SSSI). It is a candidate for Special Area of Conservation (SAC) because ospreys returned to the site in 2001. Research at Bassenthwaite Lake has investigated ecological responses to altered nutrient load and climate change.

Bassenthwaite Lake has been home to the UK's rarest freshwater fish, the vendace (Coregonus albula). Vendace are, in part, found in deep, cold lakes and feed on planktonic crustacea. They have a lifespan of around six years and are not known to migrate. They are currently protected under the Wildlife and Countryside Act of 1981 and also appear on the UK List of Priority Species and Habitats of the UK Biodiversity Action Plan.

Monitoring by CEH (gill net) from 1995 to 2010 indicated that vendace became extinct from Bassenthwaite Lake in 2001. This extinction was rapid and followed a five-year period when abundances appeared to be stable (vendace abundances in 2000 estimated at about 120ha-1).

Bassenthwaite Lake suffers from eutrophication and associated algal blooms. Phosphorus sources in the catchment include surface runoff from fertilisers applied to the fields of nearby farms, septic tanks and effluent from nearby sewage treatment works.

Eutrophication can affect vendace populations directly, through deoxygenation of the lower water column and siltation of spawning grounds, and indirectly, by shifting the balance of species within the fish community. The latter may be particularly relevant in Bassenthwaite Lake, which has received introductions of roach (Rutilus rutilus), ruffe (Gymnocephalus cernuus) and, more recently, dace (Leuciscus leuciscus). For example, ruffe were reported to have had a predatory impact on vendace eggs during the spawning seasons of 1996 and 2001. Populations of both roach and ruffe have increased in recent years and are now major components of the fish community. The relatively weak temperature stratification in the lake limits the volume of low-temperature water in the summer and it is possible that increased water temperature associated with climate change has exacerbated the loss of this species from Bassenthwaite Lake. Finally, deposition of sediment on the spawning grounds may also have limited recruitment of fish to the lake.

Tertiary treatment was introduced at the major sewage works serving Keswick in 1995 to reduce the amount of phosphorus entering the lake.

Grants from the Catchment Sensitive Farming Project were introduced to reduce phosphorus runoff from farms. These have been used to create buildings and slurry tanks to store excess manure, thereby reducing run-off from this source.

In May 2010, United Utilities started work on a £20 million scheme to upgrade Keswick Wastewater Treatment Works and replace the problematic Greta Grove pumping station with a new improved facility. This will improve water quality in Bassenthwaite Lake and increase treatment capacity at Keswick Wastewater Treatment Works by 30%. Greta Grove will also be replaced by a site in Rawnsley Hall, which will have double the capacity of the older works and a screened overflow.

Hundreds of trees are being planted on the hills of the catchment to reduce the amount of sediment entering the lake.

Ecological responses to these initial nutrient management measures have not included a return of vendace to Bassenthwaite Lake. Annual mean total phosphorus concentrations from about 30µg l-1 in the mid-1990s to about 16µg l-1 in 2010, annual mean chlorophyll a concentrations did not change significantly over this period (annual mean of about 10-15µg l-1 for 1990-2010). In 2010, the lake was assessed as having moderate ecological status under the guidelines of the Water Framework Directive. This suggests that there has been a delay in recovery and water quality improvements have yet to be realised. 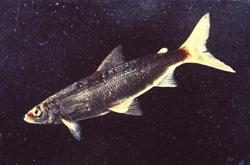