A new report published by the United Nations Environment Programme (UNEP) has predicted that even if greenhouse gases are reduced, there could be a substantial increase in the wildfires around the world.

The report, which included contributions from the UK Centre for Ecology & Hydrology (UKCEH) found some of the biggest increases will be in areas not typically used to seeing wildfires, such as the Arctic and central Europe. Areas of tropical forest in Indonesia and the southern Amazon are also likely to see increased burning if greenhouse gas emissions continue at their current rate.

Scientists at the UK Centre for Ecology & Hydrology and the Met Office carried out modelling to predict future increases in wildfires for the report, Spreading like Wildfire: The Rising Threat of Extraordinary Landscape Fires. They combined the most up-to-date satellite observations of wildfires, vegetation cover and meteorological conditions with multiple climate models, enabling the scientists to make projections for future fires with much more confidence than previously.

Although landscape fires are a natural process and, in some instances, needed for a healthy ecosystem, this report focuses on large, unusual fires (referred to as ‘wildfires’), and it’s the change in pattern of these wildfires that is causing most concern. There is projected to be a global increase of extreme fires of up to 14 per cent by 2030, 30 per cent by 2050 and 50 per cent by the end of the century.

UKCEH Land Surface Modeller Dr Douglas Kelley, the lead data analyst for the report, says: “Wildfires can significantly affect the global carbon cycle. Fires in ecosystems that store large amounts of carbon result in the release of vast quantities of CO2 into the atmosphere. This exacerbates global warming, which in turn increases the risk of wildfires

“Reducing global greenhouse gas emissions will avoid some of the biggest increases in wildfires in forests, peatlands and permafrosts, which will help limit warming and fires, as well as the impacts of people and wildlife.”

In addition to impacts on climate, wildfires have wide-ranging impacts on people and the environment including:
• damage to ecosystems, resulting in widespread deaths of plants and animals.
• increased risk to people’s lives, directly as a result of the fires as well as worsening air quality, which exacerbates respiratory and cardiovascular conditions of those who inhale smoke.
• economic costs of rebuilding areas after damage to homes, businesses and infrastructure.

Met Office climate scientist Camilla Mathison, a contributing author to the report, says: “Curtailing future greenhouse emissions reduces the risks of wildfires but does not remove it entirely, which means we also need to adapt to increases in burning in some regions.’’

The report, Spreading like Wildfire: The Rising Threat of Extraordinary Landscape Fires, has been released before representatives of 193 nations convene in Nairobi for the resumed fifth session of the UN Environment Assembly (UNEA-5.2), between 28 February and 2 March, 2022. 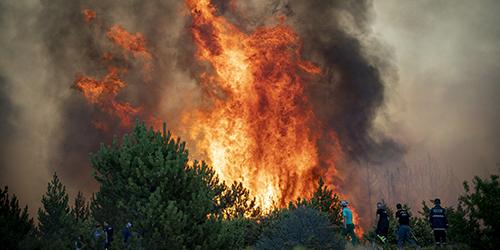