Future Flows Climate is an ensemble of 1km gridded climate transient projections under the SRES A1B emission scenario (available precipitation and potential evapotranspiration) for England, Wales and Scotland. It is based on the ensemble of 11 variants of the Hadley Centre Regional Climate Model HadRM3-PPE, which underpins the UKCP09 scenarios. This ensemble captures some of the main climate variability and climate modelling uncertainties, and ranges from 1950 to 2098. Future Flows Climate, developed for hydrological and groundwater modelling, uses a consistent approach, hence enabling comparison of results across a range of scales and geographical regions. In particular, it applies a bias-correction and downscaling procedure to HadRM3-PPE and  accounts for possible change in the snow melt processes due to climate warming.

Future Flows Hydrology is an ensemble of transient projections as daily river flow and monthly groundwater level time series, each generated for the project's 282 river sites and 24 boreholes. For each project site, they consist of 11 time series simulated using the project hydrological and groundwater levels models (HydMod) with the project climate daily time series ensemble projections (Future Flows Climate) and range from 1951 to 2098 (to allow for a warming period of one year for all the hydrological models).

FF-HadRM3-PPE-CatID is an ensemble of transient projections as precipitation and potential evapotranspiration daily catchment average time series derived for each of the project's 282 river sites and 24 boreholes. They are obtained from Future Flows Climate and range from 1951 to 2098. These climate daily time series underpin the project river flow and groundwater level time series.

These statistics summarise for most large rivers of Great Britain and one region of southern England "snapshots" of possible changes in the hydro(geo)logical regime. They are calculated as the percentage difference between the river flow and groundwater level regime based on future and reference climate. They are based on the Future Flows Climate projections and, for selected sites, a subset of the UKCP09 scenarios. They are given for up to two time slices under up to two emission scenarios. 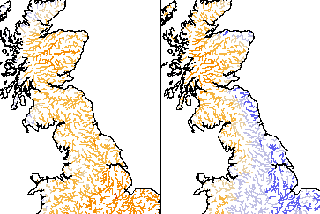