Scientific objectives of the UKLEON project

The UKLEON project will establish the UK's first coordinated, high-intensity lake monitoring network. Through the following projects, termed demonstration science-topics, we will demonstrate that such a network supports the scientific agenda for high quality and frequent measurement:

A major aim of this project will be to incorporate the real-time data available from the sensor network into a forecast system for lake phytoplankton behaviour (initiation, peak bloom and senescence) and, in particular, to provide warning for the onset of cyanobacterial blooms. For this we will use the phytoplankton community model, PROTECH, along with the real-time data and medium term weather forecasts.

PROTECH is a well-established, one-dimensional model, simulating lake thermal characteristics, overall algal biomass and biomass of individual phytoplankton species. Uncertainty in making forecasts resulting from inherent uncertainties in the knowledge of inputs to the lake, the representation of the processes in the lake, and the future weather conditions will be accounted for. Uncertainties in future weather conditions can be allowed for by using the ensemble weather predictions available from the European Centre for Medium-range Weather Forecasts (ECMWF).

This part of the project is led by Dr Alex Elliott, CEH and Professor Keith Beven at Lancaster University. 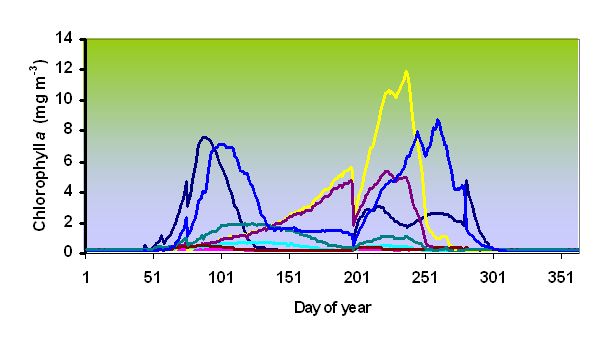 The effect of meteorology on the fate of carbon within lakes

The importance of surface waters in the global carbon cycle has only recently been recognised with freshwaters now increasingly regarded as "hotspots" of terrestrial carbon processing and atmospheric CO2 efflux. Within terrestrial drainage systems, lakes are particularly important due to their: 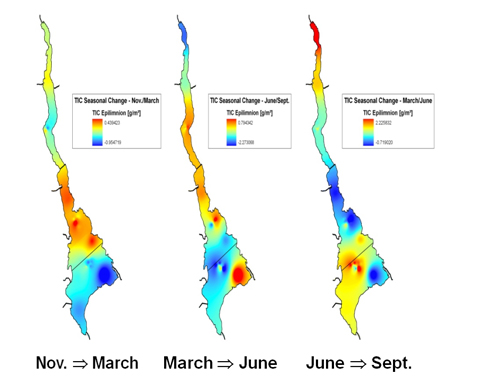 Above: Seasonal changes in epilimnetic inorganic carbon in Loch Lomond, 2004-5

It is well known that lakes can show a regionally coherent response to large-scale weather patterns such as the North Atlantic Oscillation, the position of the north wall of the Gulf or the jet-stream mediated by Rossby Wave breaking.

Lakes may also be synchronously affected by the effects of atmospheric deposition, meteorological effects on the catchment and hydrological connectivity. Until recently, all the studies of coherence have used routine monitoring data, at best at weekly resolution, to investigate coherence on seasonal or interannual timescales. The degree of coherence is governed by the strength of local, lake-specific factors compared to the strength of regional drivers. On long-time scales, trends in local characteristics, such as eutrophication, may obscure regionally synchronous behaviour at finer scales.

Use of high resolution data to examine coherence in lake temperatures has just begun but, as yet, coherence of biological, chemical or wider physical variables on these short time-scales has not been investigated.

This work is being carried out by a tied PhD student, Iestyn Woolway, largely funded by OTT Hydrometry and registered at University College London, and supervised by Jon French and Stephen Maberly. 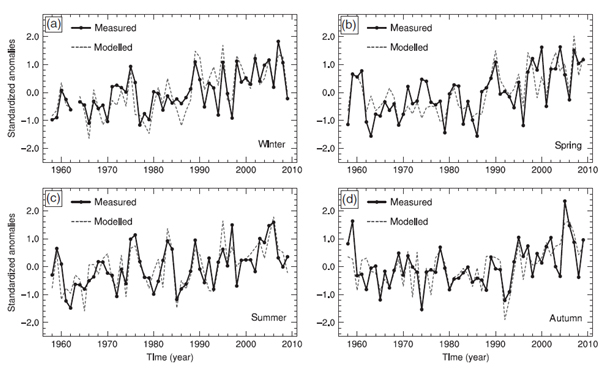