Freshwaters are vulnerable to a wide range of stressors including climate change, eutrophication, acidification, invasion of non-native species and land use change, such as deforestation. At the same time they provide essential provisioning, regulating, cultural and supporting ecosystem services including water supply, flood control, recreation and a major, but under-recognised, role in the global carbon cycle.

Because of their importance to society, most lakes are subject to numerous legally-binding national and European directives that set stringent targets for water quality and biodiversity. Meeting these targets requires a detailed understanding of lake processes which in turn requires measurements at an appropriate temporal scale. Traditional monitoring of, at best, weekly or fortnightly intervals is sufficient to record seasonal change but cannot resolve the processes driving many aspects of lake function.

This is because lake properties can be completely altered by short-term, meteorologically-driven physical disturbance such as a strong wind event that causes destratification in summer, and because the organisms that control lake function are often microbial with division times of the order of days.

The UKLEON project will develop a national demonstration network of automatic lake monitoring stations that will exploit state-of-the-art sensor technology and provide linked, concurrent, high-temporal resolution data at a globally-unique density. The scientific and operational advantage of data at this unprecedented spatial and temporal scale will be illustrated in three science demonstration topics.

The three-year project, funded by the NERC Sensor Network Programme, is led by the Centre for Ecology & Hydrology (CEH) and involves a large range of partner organisations.

Freshwaters are vulnerable to a wide range of stressors including climate change, eutrophication, acidification, invasion of non-native species and land use change, such as deforestation.

In the last 15 years, developments in data-logger-, computer- and sensor-technology have allowed an increasing number of relevant lake variables to be measured automatically at high frequency. However, existing automated systems tend to: 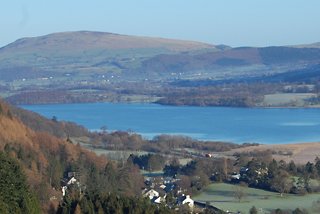 This will be achieved by:

Such infrastructure investment needs to reflect the scientific agenda for high quality and frequency measurement i.e. the need to ‘hear every note to understand the full symphony’. We will demonstrate such a network supports this agenda through the following projects, termed demonstration science-topics:

The locations of the 11 UKLEON sites are shown in the map below and their characteristics are listed in the following table:

Meteorological sensors will include:

Sensors in the lake will include sub-surface measurements of:

* Measured with a pair of Hydrolab DS5X sondes (pictured)

Most of the sensitive underwater sensors have mechanical or chemical cleaning systems to minimise the effect of biofouling.

The project is led by scientists from CEH's Lake Ecosystems group but involves colleagues from other parts of CEH as well as collaborating organisations:

The following institutions are also involved in the project: