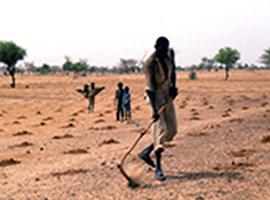 During extended periods without rain, soils lose water to the atmosphere via the process of evapotranspiration. At some point in this drying cycle, evaporation itself becomes limited by the lack of soil water. Under such water-stressed conditions, there is a change in the way solar energy is used at the land surface: less energy is required for evapotranspiration and more goes into heating up the ground and overlying air. As well as raising air temperatures, this change can have important effects on atmospheric circulations, clouds and rain.

The seasonal evolution of vegetation is often sensitive to drought, in turn affecting crop yields and natural habitats. In the longer term, drying soils can trigger changes in the regional composition of vegetation, for example favouring shrubs over trees. Such changes in vegetation are expected to play an important future role in the global climate system; vegetation offsets much of the carbon dioxide which is emitted from man's activities, and loss of trees weakens this carbon sink.

For several decades, weather prediction models have incorporated simple descriptions of how soil water affects the atmosphere. Driven by a growing realisation of the importance of soil and vegetation processes for future climate, land surface models within so-called Earth System Models (ESMs) have become more complex, allowing us to simulate vegetation dynamics and trace gas responses to drought amongst other factors.

These models rely on basic equations designed to capture the physical processes of, for example, evapotranspiration and soil drainage at a point in space. However, between locations there are huge and sometimes unknown differences in the nature of vegetation and soil which control these processes. All the same, the ESMs apply these equations over diverse areas of many thousands of square kilometres. Critically, there are no accurate in situ measurements at such large spatial scales which can be used to check how well the model simulates key land processes.

The e-stress project (2014–2017) focuses on how the drying of soils affects fluxes of sensible and latent heat into the atmosphere, triggering multiple physical and biogeochemical feedbacks across many continental regions of the world. 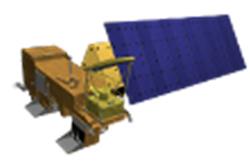 Using satellite-derived datasets, it will deliver for the first time a global evaluation of this critical land surface behaviour within Earth System Models.

We will use state-of-the-art Earth Observation (EO) datasets of land surface temperature (LST) which provide both spatial detail (down to 1km) and global coverage of key land properties. We will examine when, where and how rapidly the land warms during dry spells and how this influences the occurrence of heat waves.

We will look at these relationships at the same coarse spatial scale as the ESMs and identify which regions and vegetation types are more prone to drought stress.

The EO data are complemented by precipitation datasets, meteorological re-analyses and land cover maps. The natural variability in rainfall allows us to quantify land surface response to a large range of hydro-meteorological conditions for different land cover types. 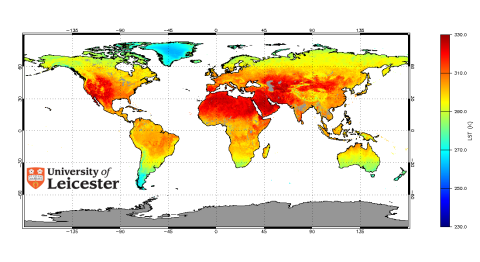 Soil water plays a central role in both physical and biogeochemical processes in the Earth System. As soils dry out, evapotranspiration becomes water-limited (“stressed”), and Land Surface Temperature (LST) and sensible heat flux both rise as a result.

This change in surface behaviour during dry spells directly affects critical processes in both the land and the atmosphere. Soil water deficits are often a precursor in heat waves, and control where feedbacks on precipitation become significant. Climate models suggest substantial changes in the global water cycle in the decades to come, particularly with respect to extremes such as heat waves.

Providing realistic sub-continental scale seasonal to decadal predictions of heat waves and droughts relies critically on an accurate depiction of seasonal soil water evolution and its impact on the surface energy balance.

Earth System Models include a representation of the soil water balance, with input from precipitation and outputs of evapotranspiration and runoff, at a resolution of typically 1-2°. Evaluation has traditionally focused on simulating the observed mean diurnal or seasonal cycles from a limited number of flux tower sites (~1km2) across the world using site-specific meteorological and land surface data. Such approaches are an important component in model evaluation and have shed light on the timescales of evapotranspiration decay during a dry spell. Evaluation at the large scale is a major challenge for the land model community through lack of surface flux observations at an appropriate scale. Spatial heterogeneity in soil and vegetation properties and meteorological forcing renders simple extrapolation from flux tower observations inappropriate.

Whilst a robust global observational dataset for evaluating surface fluxes within ESMs is still some way off, other remotely-sensed data do offer the potential to test how well land models simulate the critical hydrological control on surface fluxes. Thermal infra-red data are particularly useful in this respect; LST is a physical property that can be consistently validated from earth observation, and high quality time series exceeding 10 years now exist.

Variability in daytime LST provides unique observational insight into soil water stress on the regional scale. For example, work within the SWELTER-21 project indicates that one can clearly observe the impact of soil water stress on summertime LST in Europe (see figure below). 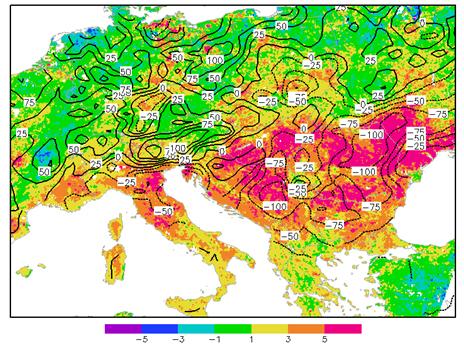 Objectives and outputs of the e-stress project

The e-stress project will develop novel observational datasets of hydrological controls on land surface fluxes across the globe, and use these to perform a quantitative large-scale evaluation within Earth System Models. We will use the temporal evolution of remotely-sensed land surface temperature in combination with precipitation data, to diagnose periods of evaporative stress, and compare the observed dynamics with model outputs. 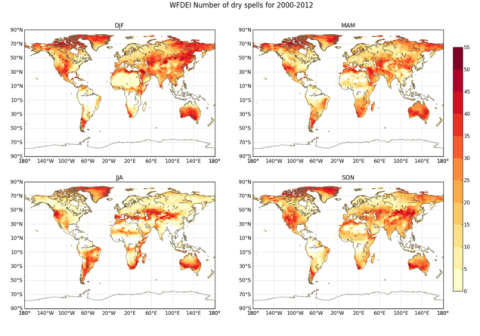 1992-1996: PhD, Department of Meteorology, University of Reading. I gained my PhD working on mesoscale modelling of land-atmosphere interactions as part of the HAPEX-Sahel experiment in West Africa.