At a global scale peatlands store about the same amount of carbon that is present in the atmosphere and the ability of peatlands to act as a long-term carbon sink has played a major role in moderating changes in atmospheric CO2 concentration.

Since the end of the last ice age northern peatlands have acted as a major sink for atmospheric CO2; peat bogs now cover more than 420 million ha of the earth’s surface and contain 500,000m tonnes of carbon, making them the single most important terrestrial carbon store. In the UK peatlands cover ~15% of the land area and store >1400 Mt of carbon.

Given the importance of peatlands in the global carbon budget, there are surprisingly few sites at which enough measurements exist to determine whether they are currently acting as carbon sinks or sources.

The CEH Carbon Catchments are a network of four UK peatland sites which aim to quantify the carbon balance of individual peatlands (sometimes termed the “net ecosystem carbon balance”) by measuring and combining various flux terms.

This involves linking long-term measurements of land-atmosphere carbon flux (measured using eddy covariance and chamber methods) to downstream fluxes of particulate, dissolved and gaseous forms of carbon in rivers. The carbon balances of individual peatlands are based on high quality, reliable flux data, leading to an empirical understanding of the factors controlling these fluxes.

Each site is unique in its land use and history. The whole network provides a long-term basis for estimating the sink strength of peatlands under different climate and management scenarios.

The CEH Carbon Catchments also provide a framework for other related research, including PhD studentships. The Moor House site was the focus of a collaborative study with the University of Leeds on the role of peatland “pipes” in the transport of various forms of carbon to the stream system.

The aim of the research undertaken in the CEH Carbon Catchments is to quantify the sink-source relationships of peatlands and answer several key questions:

Long-term measurements of CO2 (and CH4) exchange over peatlands by scientists in the UK, Canada, Sweden and Finland show considerable year-on-year variation in the amount of CO2 draw-down from the atmosphere. This depends on seasonal changes in climate and in particular the timing of the switch that takes place at the end of the spring when photosynthesis replaces respiration as the dominant process. The switch reverses in the autumn when respiration takes over again from photosynthesis.

Carbon flux measurements (net ecosystem exchange or NEE) made by flux towers are now being linked to both CH4 emissions and losses in the aquatic system to “close” the peatland carbon budget. Streams draining peatlands export considerable amounts of carbon in various forms (solutes, particles and gases). Drainage systems associated with peat bogs are also supersaturated with CO2 and CH4 which is lost to the atmosphere by out-gassing (“evasion”). These “hotspots” of gas loss combined with losses associated with the leakage of organic C into streams are important terms in the annual carbon balance. The Carbon Catchments project brings together these individual measurements to produce site-specific annual carbon budgets.

For general enquiries about the project contact Dr Kerry Dinsmore (Carbon Catchments Coordinator). Details for who to contact about individual sites are included here. 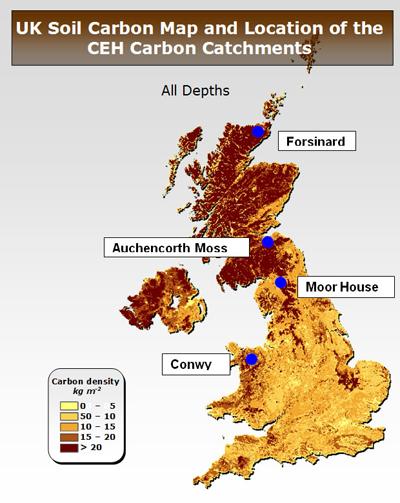 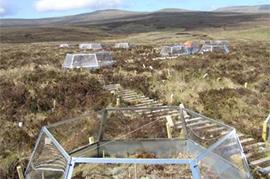 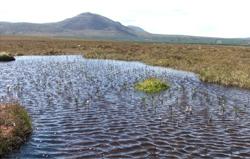