Upland sites have traditionally been exploited for livestock grazing, timber production and salmonid fisheries, but are also of high conservation and amenity value and important for water resources and carbon storage. In addition, as a result of high rainfall and low permeability soils, a disproportionate amount of floodwaters can be generated from upland catchments. Land use changes affect the overall catchment water balance by influencing evaporation rates.

The Plynlimon research catchments are two, almost identical, adjacent uplands catchments, with the exception that one is used for grazing sheep while the other is mostly under plantation conifer forestry. Intensive and long-term monitoring within the catchments underpins a wealth of hydrological and hydro-chemical research. The combined datasets include river flow, rainfall, cloud and stream hydro-chemistry, meteorology and a variety of detailed spatial datasets representing the topography, soils and rivers of the catchments. 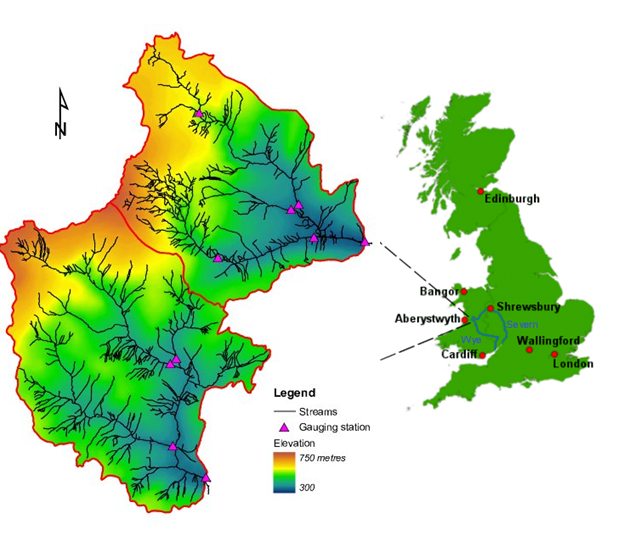 The catchments, which cover a combined area of 19.25 km2, are located within the headwaters of the river Severn and the river Wye, on the east flanks of Plynlimon, approximately 20km inland of Aberystwyth on the mid-Wales coast.

They have an upland character at 300-700m above sea level. The geology of the catchments are similar, comprising mainly fine grained sediments (mudstones and slates) which have been folded and faulted. Some of the faults have been mineralised (lead) and were mined in the period before World War I. Although there is some localised groundwater present, investigations indicated the catchments may be regarded as watertight.

Research at the site was originally conceived in 1968 to compare water yields from plantation forestry and grassland catchments. Three instrumented sub-catchments are nested within each of the main instrumented catchments, each with its own flow gauging structure supported by automatic weather stations and a raingauge network. The site now has nearly 40 years of high temporal resolution river flow and meteorological data, supplemented by hydrological process studies on flow pathways, forest interception and evaporation.

The data from the site have been used to report on the hydrochemical responses of upland catchments to declining acid deposition, forest harvesting, agricultural management and climate change. More recently, high temporal resolution sampling has been used to develop new mathematical and statistical methods for the interpretation of short and long-term chemical trends. Data from the site have been used extensively to inform the development and calibration of biogeochemical models of acidification, weathering and carbon and nitrogen dynamics.

Measurements relating to the hydrological cycle in the Severn and Wye catchments currently include:

We have a wide range of chemical analytical facilities at CEH for soil, water and gas analysis including ion chromatography and GC. Isotope labelling work can be undertaken by agreement with the co-located university (Bangor).

DURESS, led by Cardiff University, is part of a NERC initiative to assess the role of biodiversity in delivering key ecosystem services. It brings together a consortium of 28 researchers from a range of disciplines and institutions, and is actively supported by seven key stakeholders who represent the water industry, the leisure industry, policy-makers, land owners and land managers.

The Plynlimon catchments were chosen as part of the project because of its infrastructure and long-term data sets available for water chemistry and river flow. DURESS studies at Plynlimon included leaf litter, nitrogen and DOC addition experiments, stream biota monitoring and the installation of spectrometer probes at two sites.

Plynlimon also acts as a satellite 'Critical Zone' observatory site. The CZ is the environment that extends from the top of the tree canopy to the bottom of our drinking water aquifers; it is where terrestrial life flourishes and feeds most of humanity. The heart of the CZ is where soils are formed, degrade and provide essential ecosystem services. The Critical Zone observatory project aims to investigate and model the processes determining soil sustainability in Europe. Data from the site will be used to test biogeochemical and nutrient models for SoilTrEC. Plynlimon is part of an international network of sites, located over similar geological units, studying processes of soil development across climatic and land use gradients; other sites are in the USA and China.

To discuss opportunities to collaborate with CEH and use our facilities at Plynlimon, contact: David Norris