Will earlier springs throw nature out of step?

The recent trend towards earlier UK springs and summers has been accelerating, according to a study published today (9 February 2010) in the scientific journal Global Change Biology.

The collaborative study, involving scientists from 12 UK research institutions, universities and conservation organisations, is the most comprehensive and rigorous assessment so far of long-term changes in the seasonal timing (phenology) of biological events across marine, freshwater and terrestrial environments in the UK. 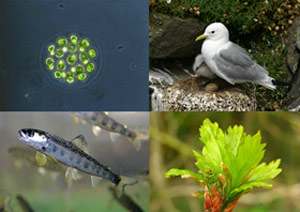 Led by Dr Stephen Thackeray and Professor Sarah Wanless of the Centre for Ecology & Hydrology, the research gathers together more than 25,000 long-term phenology trends for 726 species of plants and animals. More than 80% of trends between 1976 and 2005 indicate earlier seasonal events. The study considers a diverse array of organisms including plankton, plants, insects, amphibians, fish, birds and mammals. On average, the seasonal timing of reproduction and population growth has become earlier by more than 11 days over the whole period, but change has accelerated in recent decades.

“This is the first time that data have been analysed with enough consistency to allow a meaningful comparison of patterns of changing seasonal timing in the UK among such a diverse range of plants and animals.”

The research shows that there are large differences between species in the rate at which seasonal events have shifted. Changes have been most rapid for many organisms at the bottom of food chains, such as plants and the animals that feed upon them. Predators have shown slower overall changes in the seasonal timing of their life cycle events. However, the seasonal timing of reproduction is often matched to the time of year when food supply increases, so that offspring receive enough food to survive.

A key question is whether animals higher up the food chain will react to the faster rates of change in the plants and animals they feed upon, or whether they will fail to do so and become less successful at rearing their offspring.

Dr Thackeray said, “This is the first time that data have been analysed with enough consistency to allow a meaningful comparison of patterns of changing seasonal timing in the UK among such a diverse range of plants and animals.”

Professor Wanless said, “It is important to realise that this analysis doesn't identify which predator-prey relationships are most at risk of disruption due to changes in timing. What it does do is highlight that the recorded changes need urgent investigation, particularly for species with high economic or conservation importance.”

Co-author Richard Smithers of the Woodland Trust said, “Phenology is ‘the canary in the cage’. The results of this new study make real our changing climate and its potential to have profound consequences for the complex web of life.”

Jill Nelson, Chief Executive of the People’s Trust for Endangered Species who supplied data to the study said, “PTES were delighted to support this excellent study by contributing data from the National Dormouse Monitoring Programme which has been running for over 20 years. It highlights the need for continuous monitoring programmes such as this to detect change over long time-scales to underpin robust conservation planning.”

The research was funded by the Natural Environment Research Council and carried out by staff from the Centre for Ecology & Hydrology, Woodland Trust, Butterfly Conservation, University of Cambridge, Rothamsted Research, Marine Scotland, Royal Holloway University of London, Sir Alister Hardy Foundation for Ocean Sciences, Freshwater Biological Association, People’s Trust for Endangered Species, British Trust for Ornithology, and the National Pollen and Aerobiology Research Unit University of Worcester. Two of the research team, originally based at the Centre for Ecology & Hydrology, have since moved to Poznan University of Life Sciences in Poland and the Natural Environmental Research Institute in Denmark.

The Centre for Ecology & Hydrology issued a press release for this story.

Read more details on the analysis in a Q & A with lead author Dr Stephen Thackeray.

Why should we care about phenology? by T.H. Sparks

This research is published on 9 February 2010 in the journal Global Change Biology and will be freely available - no subscription is required. The full paper reference is: