Last month was the wettest October for England & Wales since 2000, according to the latest update to the UK's most authoritative analysis of water resources status. For parts of southern England, as much rainfall fell in October as in the previous four months combined. 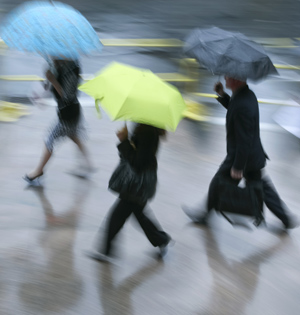 The analysis is contained in the latest monthly hydrological summary for the UK, covering the month of October 2013. The monthly summaries are produced by the National Hydrological Monitoring Programme, operated by the Centre for Ecology & Hydrology (CEH) in conjunction with the British Geological Survey.

The most significant impact of the sustained rainfall was the rapid reduction of historically high early autumn soil moisture deficits; for England & Wales, the recovery in soil moisture levels was the second largest in a single month, behind only the sudden cessation of drought conditions in 1976.

Reservoir stocks also benefited from the wet conditions; in Northern Ireland, Silent Valley registered its second largest increase for any single month in a series from 1993.

Hydrologist Simon Parry from the Centre for Ecology & Hydrology said, "After concerns at the beginning of October about the timing of the onset of groundwater recharge, the moderation of soil moisture deficits across most aquifer outcrops allowed infiltration to commence, suggesting a healthy overall picture for water resources approaching the winter season."

A PDF of the full 12-page October 2013 summary can be downloaded here [NEED NEW INTERNAL LINK].

The Centre for Ecology & Hydrology jointly operates the National Hydrological Monitoring Programme (for the UK) in conjunction with the British Geological Survey. NHMP scientists produce the UK Monthly Hydrological Summary which assesses rainfall, river flows, groundwater and reservoir levels. They also operate the UK’s National River Flow archive. The NHMP also has a remit to analyse major flood and drought events in the UK and analyse long term trends in UK hydrological data. The UK Monthly Hydrological Summary is published on, or before, the tenth working day, of the following month. A Hydrological Outlook for the UK is also available.

Hydrological Outlook for the UK