November was typically autumnal with contrasting synoptic patterns, and colder and drier conditions prevailing by the end of the month. Notwithstanding the dry spell which commenced in the second week, the water resources outlook for the UK remains healthy, according to the latest update to the UK's most authoritative analysis of water resources status. 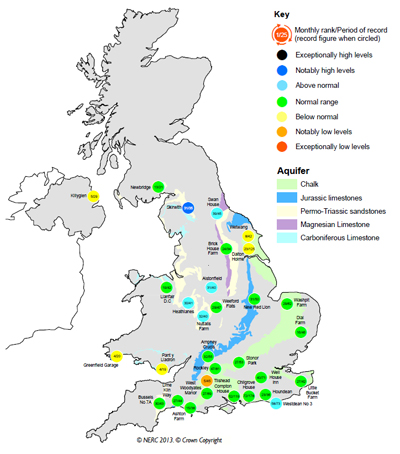 The analysis is contained in the latest monthly hydrological summary for the UK, covering the month of November 2013. The monthly summaries are produced by the National Hydrological Monitoring Programme, operated by the Centre for Ecology & Hydrology (CEH) in conjunction with the British Geological Survey.

The first fortnight of the month was mild and cyclonic, with some notable storm totals in some areas and significant snow on northern hills, before high pressure became dominant. Correspondingly, most rivers were in spate through early-November and flood alerts were common during the first week. But sustained recessions then became established, leaving runoff rates well below the seasonal average entering December; particularly depressed flows characterised parts of Northern Ireland and eastern Scotland. In eastern and southern England, winterbournes also remain dry. Much of Northern Ireland recorded less than 60% of the November average rainfall and, for the UK as a whole, provisional data indicate that it was the second driest November in the last 20 years.

Replenishment to reservoirs during November was generally below the normal late autumn average but, boosted by the exceptional October inflows, overall stocks for England & Wales remain considerably above average. Although groundwater levels vary substantially across the country, reflecting both spatial variations in soil moisture conditions through the autumn and varying response times of individual aquifer units, levels in the great majority of index wells remain within, or above, the normal range.

The Centre for Ecology & Hydrology jointly operates the National Hydrological Monitoring Programme (for the UK) in conjunction with the British Geological Survey. NHMP scientists produce the UK Monthly Hydrological Summary which assesses rainfall, river flows, groundwater and reservoir levels. They also operate the UK’s National River Flow archive. The NHMP also has a remit to analyse major flood and drought events in the UK and analyse long term trends in UK hydrological data. The UK Monthly Hydrological Summary is published on, or before, the tenth working day, of the following month. A Hydrological Outlook for the UK is also available.