After the first week, June was a month dominated by unsettled conditions with localised thundery showers bringing substantial rainfall. For the UK as a whole, rainfall was above average but particularly so in parts of south-east England, the Midlands and eastern Scotland. Below average rainfall was mainly confined to western Scotland.

In response to the wet June, soil moisture deficits decreased and were below average in the vast majority of regions in the UK - June deficits were the second lowest (behind 2012) for the Chalk outcrop in a series from 1961.

The summary shows that average river flows for June were generally in the normal range or above, with below normal flows confined to some north-western catchments. Flows were notably high, and in some catchments exceptionally so, across much of the English Lowlands and in parts of north-east Scotland. Groundwater levels followed their seasonal recessions at almost all index sites, but generally remained in the normal range or above.

Summary author, Katie Muchan of the Centre for Ecology & Hydrology said, "Despite the above average rainfall, stocks in the majority of reservoirs fell during June with large decreases in some western impoundments. However for England and Wales overall reservoir stocks remain slightly above average. With normal to above normal groundwater levels across the main aquifers and healthy reservoirs stocks, the water resources outlook for the rest of the summer remains healthy." 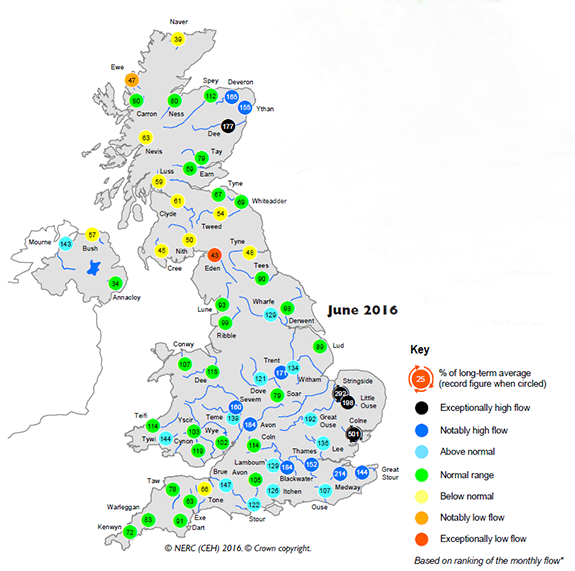 A PDF of the full 12-page June 2016 summary can be downloaded here.

The monthly summary is a look back at hydrological events occurring in June 2016. Latest information on flood warnings is provided by the Environment Agency, Natural Resources Wales and Scottish Environment Protection Agency (flood warnings for Northern Ireland are not available).

Read the full June 2016 Hydrological Summary for the UK