Wet and mild conditions dominated the UK in January 2016, contributing to the warmest and wettest November-January on record. All regions registered above average rainfall during what was the fourth wettest January for the UK in a series from 1910, with some north-eastern areas recording more than double the average.

Coastal parts of eastern Scotland and North Yorkshire received more than 250% of average rainfall and much of the south coast received in excess of 175% of average. Many rivers in north-east Scotland established new monthly mean flow records. A number of these rivers also established new January peak flow records (for the Don and Ythan these were the highest for any month); several burst their banks and caused extensive and severe flooding. Average outflows from Great Britain were the highest on record for January. 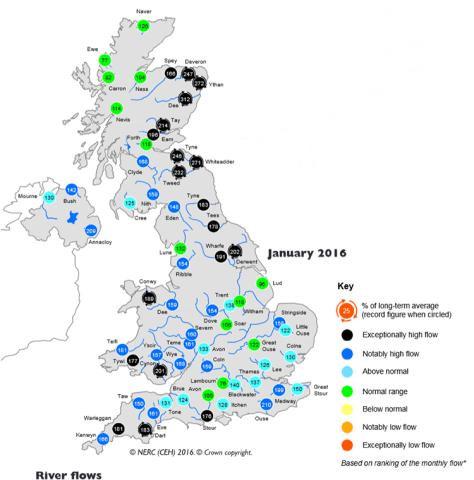 Soils across the UK remained saturated following the wet conditions in January and the previous two months. In north-east Scotland many rivers established new monthly mean flow records (for the second consecutive month in some cases). Reservoirs across the country remained close to capacity and stocks for England & Wales were appreciably above average. Groundwater levels responded to recharge and the majority of levels were in the normal range or above.

Summary author Lucy Barker of the Centre for Ecology & Hydrology said, "With soils saturated, river flows and groundwater levels above normal and further unsettled weather at the beginning of February, there is an enhanced risk of fluvial and groundwater flooding across parts of the UK.

A PDF of the full 12-page January 2016 summary can be downloaded here.

The monthly summary is a look back at hydrological events occurring in January 2016. Latest information on flood warnings is provided by the Environment Agency, Natural Resources Wales and Scottish Environment Protection Agency (flood warnings for Northern Ireland are not available).

The NHMP also has a remit to analyse major flood and drought events in the UK and analyse long-term trends in UK hydrological data. The UK Monthly Hydrological Summary is normally published on, or before, the tenth working day, of the following month. A Hydrological Outlook for the UK is also available, and is updated monthly. The outlook published in February 2016 can be viewed here.