An increasingly catholic diet among European shags at one of Scotland’s best-studied breeding colonies has been linked to long-term climate change and may have important implications for Scotland’s seabirds, according to research led by the Centre for Ecology & Hydrology.

Three decades of data from the Isle of May, off Scotland’s east coast, found that the proportion of sandeels – the bird’s usual fayre - declined by 48% between 1985 and 2014. Over the same period, the number of other fish prey in the diet increased, from an average of just one species per year in 1985 to eleven in 2014.

Crucially, the results, presented in the Marine Ecology Progress Series this week and produced in collaboration with researchers from the University of Liverpool, the Sir Alister Hardy Foundation for Ocean Science, and Biomathematics and Statistics Scotland, show that the increase in diet diversity was linked to warming trends in Sea Surface Temperature, an indicator of climate change in the region.

"...the increase in diet diversity was linked to warming trends in Sea Surface Temperature, an indicator of climate change in the region."

The North Sea is one of the most rapidly warming marine ecosystems on the planet, and warmed by 0.037 degrees Celsius per year between 1982 and 2012. Lead author, Richard Howells, explained that the study, "ties in with many observations of changes in the abundance, distribution and phenology of many species in the North Sea, and a decline in the availability and size of sandeels. 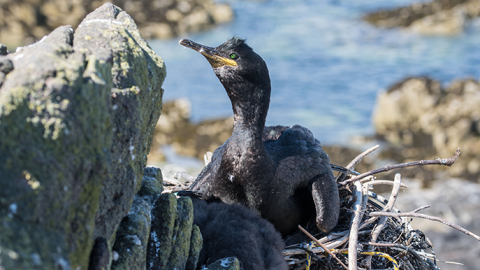 "Climate models predict further increases in sea surface temperature and weather variability in the region, with generalisation in shag diet, one way in which this species appears to be responding to this change."

Short-term weather conditions also impacted on the bird’s ability to feed, with “windier conditions on a daily basis linked to fewer sandeel in the diet. This may affect the ability of parents to successfully feed their chicks,” Howells said.

”Changes in the prey types consumed by this population suggest that adults may now be hunting across a broader range of habitats than they did in the past, such as rocky habitats where they can find the Rock Butterfish. Such changes may alter interactions with potential threats, such as small-scale offshore renewable developments.” 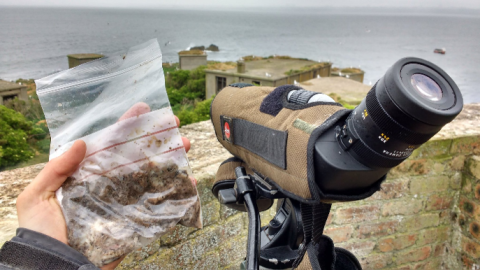 Finally, Howells added, “By identifying effects of both long-term temperature trends and short term weather variability, this study helps us gain a better understanding of how our seabird species are affected by ongoing climate change, and may help us direct conservation efforts to preserve these populations now and in the future”.

CEH's long-term monitoring programme on the Isle of May