Overall, May was a warm month with above average temperatures recorded across the country. Although the UK rainfall was near-average, there were regional differences. Parts of south-east England and south Wales saw localised thundery showers throughout May and received above-average rainfall. In contrast, rainfall was below average in northern England, south-west England and eastern Scotland, notably so in some areas.

In response to the generally dry conditions in May, soil moisture deficits climbed and were near-average at month end, a contrast from the minimal deficits at the end of April. Reflecting the rainfall patterns in May, river flows were generally in the normal range, with below normal flows in south-western and northern England. Correspondingly, reservoir levels are moderately below average at some impoundments in northern and south-western England, following steep declines through May. However, overall reservoir stocks are near-average at the national scale.

Summary author Lucy Barker of the Centre for Ecology & Hydrology said, "Coupled with normal to above normal groundwater levels across the main aquifers, this implies that the water resource outlook for the summer remains favourable." 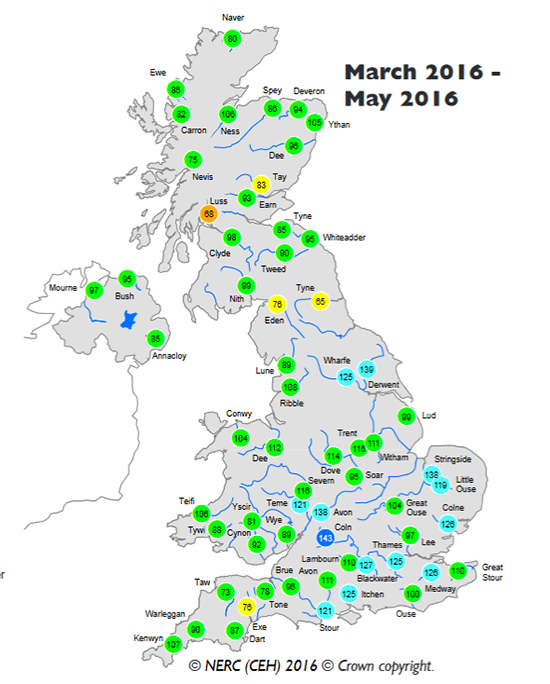 Above: March to May 2016 river flows in the UK. Green and blue indicate normal range or above.

The monthly summary is a look back at hydrological events occurring in May 2016. Latest information on flood warnings is provided by the Environment Agency, Natural Resources Wales and Scottish Environment Protection Agency (flood warnings for Northern Ireland are not available).

Read the full May 2016 Hydrological Summary for the UK