Warm August with below average rainfall across most of the country

The UK's warmest August since 2004 also saw below average rainfall across most of the country, appreciably so in parts of England and eastern Scotland, the latest hydrological summary for the UK confirms. The dry spell through the latter part of the month concluded a summer that contrasted markedly with the run of wet summers observed since 2007 - it was the warmest summer since 2006 and the driest since 1996 in England & Wales. However, the generally stable conditions were occasionally punctuated by unsettled weather, including some locally intense downpours. 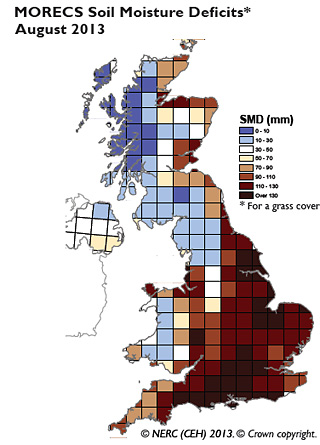 The analysis is contained in the latest monthly hydrological summary for the UK, covering the month of August 2013. The monthly summaries are produced by the National Hydrological Monitoring Programme, operated by the Centre for Ecology & Hydrology (CEH) in conjunction with the British Geological Survey.

The warmth and dryness of the last three months has resulted in the highest late-summer soil moisture deficits for a decade, which will likely result in further recessions in groundwater levels and groundwater-fed river flows, and could delay the onset of the autumn recharge season. Below-average groundwater levels in parts of the southern Chalk reflect moderate rainfall deficits extending back to the start of 2013.

Rainfall deficits can be traced back to the start of 2013 in a majority of regions: Northern Ireland is the only region to register above average rainfall accumulations over this timeframe.

Nevertheless, the water resources situation remains relatively healthy for late summer. Reservoir stocks at the end of August were above average for England and Wales as a whole and appreciably so in some impoundments in Wales and northern England.