A study of voles has provided new clues on understanding infection in humans and other animals, according to research published this week in Science. 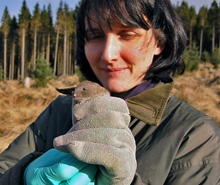 The findings of the work could help with the future prediction and control of parasitic diseases in animals. The results could also help further our understanding of infection in people.

"The results show that to predict and control parasites and disease in natural populations, we need to understand community interactions among parasites, not just single host-parasite interactions."

Previously interactions between parasites in natural populations had been studied only rarely. However it is likely that most hosts, including humans, at most periods, are infected with more than one parasite species, either simultaneously or sequentially.

The research team asked a number of questions. Is there a structure to these parasite communities, or are they just an assemblage of independent species?  If there are patterns of co-infection, do they arise because infection by one parasite species affects susceptibility to others or because of inherent differences between hosts? And if parasites do affect one another, how powerful and important are these effects?

Analysis of the time-series data generated from the field study showed that the community of parasites represented not four independent infections but an interconnected web of interactions. The study also showed that there are large positive and negative effects of other infections on the risk of being infected by any given pathogen. Effects are typically of greater magnitude, and explain more variation in infection risk, than the effects more commonly considered in disease studies, such as age, sex or season.

The study results highlight the dangers inherent in the common practice of considering parasite species in isolation rather than looking at whole parasite communities.

Co-author Dr Sarah Burthe, from the Centre for Ecology & Hydrology, said, “The results show that to predict and control parasites and disease in natural populations, we need to understand community interactions among parasites and not just single host-parasite interactions.”

Lead author of the study Dr Sandra Telfer, from the University of Aberdeen, said, “Our work has direct relevance for disease studies in humans and animals and highlights that even parasites that induce few clinical signs of disease can have a significant impact on an individual’s susceptibility to other parasites.”

The authors point out that because field voles are also infected by macroparasites, as well as other microparasites, their study only considers a portion of possible interactions in the parasite community.

The research was funded by NERC and the Wellcome Trust.

Aberdeen University issued a press release for this story.