On the whole, October was settled, with anticyclonic conditions dictating weather patterns for much of the month. Monthly temperatures were moderately above average and it was unseasonably warm and sunny at times, especially in the north and west. Overall, it was a dry month with the majority of the UK receiving below average rainfall, and it was particularly dry in Scotland and Wales.

By month end however, unsettled conditions began to dominate, and current forecasts favour wetter-than-average conditions over the coming few months. 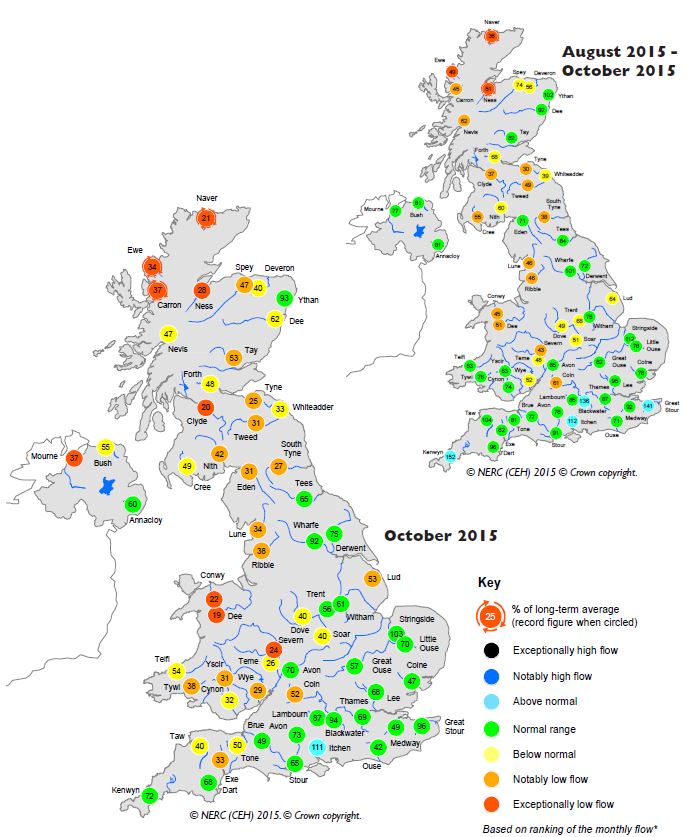 Following notably low rainfall over the last three months, October river flows were generally in the normal range or below, with exceptionally low flows in some northern and western catchments. Groundwater levels were generally in the normal range or moderately below, although recoveries were evident in some boreholes, particularly in the far south. At the national scale, reservoir stocks were moderately below average at the end of October.

A PDF of the full 12-page October 2015 summary can be downloaded here.

The monthly summary is a look back at hydrological events occurring in October 2015. Latest information on flood warnings is provided by the Environment Agency, Natural Resources Wales and Scottish Environment Protection Agency (flood warnings for Northern Ireland are not available).

The NHMP also has a remit to analyse major flood and drought events in the UK and analyse long-term trends in UK hydrological data. The UK Monthly Hydrological Summary is normally published on, or before, the tenth working day, of the following month. A Hydrological Outlook for the UK is also available, and is updated monthly.