Parts of the farm landscape that look overgrown and "scruffy" are more important in supporting wildlife than they first appear, according to new research published this week in Ecology Letters.

The findings stem from an intensive study of an organic farm in Somerset by a team of scientists focusing on the complex ways in which animals and plants interact. First, the team, comprising researchers at the universities of Hull and Bristol and the Centre for Ecology & Hydrology (CEH), created one of the world’s largest terrestrial food webs, or a "what-eats-what" guide to the food chain, and then developed a method of predicting what would happen to the whole food web when habitats were lost.

They found that many types of insects and other animals have food sources in the apparently scruffier parts of the farm such as field corners, the edges of farmyards and bits of wasteland where old tractors and broken machinery slowly rust away.

The research, funded by the Biotechnology and Biological Sciences Research Council (BBSRC) and Defra, also allowed the team to identify when different animal species would be made extinct by the loss of particular habitats, and which plants are the most critical in sustaining animal life.

Dr Darren Evans from the University of Hull, lead author of the paper, said, “This research has shown us how the biodiversity of a particular area can be affected by changes to its habitat. We discovered that the small patches of unkempt and weedy areas on a farm are actually hugely beneficial in supporting local ecosystems. Indeed, they even benefit animals that could benefit farmers by providing pollination and natural pest control.”

Dr Michael Pocock, from the Centre for Ecology & Hydrology, said, “We found that the important food plants for many animals are found in multiple habitats on the farm boosting farmland wildlife resilience. In other words, if a farmer removes mature hedgerows and the plants this habitat contains, most animals could (in theory) survive because the plants are found in other parts of the farm. Our new analytical approach allows us to test which habitats are disproportionately most important and rough ground, like the unkempt field corners, are most important of all.”

Project leader Professor Jane Memmott from the University of Bristol said, “Essentially, in unkempt patches of the countryside there are a wide range of plants that many would regard as weeds, which are an important food source for many animals. There certainly seems to be a case for 'doing nothing' in these habitats. Farmers may even gain by having these scruffy areas because they support so many beneficial animals, such as bees.”

The University of Hull issued a press release for this story. 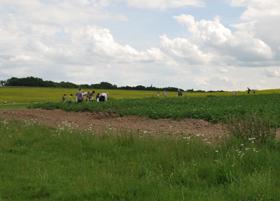