A new scientific review of the winter floods of 2015/2016 confirms that the event was one of the most extreme and severe hydrological events of the last century.

The new hydrological appraisal - ‘The Winter Floods of 2015/2016 in the UK’, published on the first anniversary of Storm Desmond (December 5th), brings together both river flow and meteorological data in an analysis of the events that led to extensive river flooding in northern England, Scotland, Northern Ireland and parts of Wales over a three month period.

The study, carried out by scientists from the Centre for Ecology & Hydrology in collaboration with the British Hydrological Society recognises that the Winter 2015/2016 episode ranks alongside the floods of 1947 as one of the two largest flood events of the last 100 years at least. 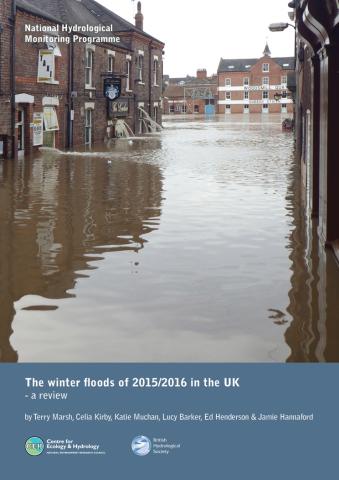 Storm Desmond alone caused an estimated insurance bill of more than £1.3 billion when it struck on the 5th and 6th December last year.

The review also highlights that 16,000 properties in England were flooded during the three months of ‘remarkably persistent and exceptionally mild cyclonic’ activity which, along with Storm Desmond, included the major storms of Abigail, Frank and Gertrude.

Lead author Terry Marsh, from the Centre for Ecology & Hydrology, said, “At a national scale the winter floods of 2015/16 were the most extreme on record.  The November to January period was the wettest three-month sequence in the UK rainfall series – which begins in 1910. Correspondingly, river flows across much of the country exceeded bankfull for extended periods. The associated flooding was both extensive and repetitive, and total river outflows from Great Britain following the passage of Storm Desmond in December exceeded the previous maximum by a substantial margin.”

Co-author Jamie Hannaford, from the Centre for Ecology & Hydrology, said, “Last winter’s devastating floods follow the winter 2013/2014 flooding in southern England and other severe events of recent years including the 2005 and 2009 floods in Cumbria. Understandably, this leads to speculation that flood risk is increasing due to climate change. There are trends towards higher river flows over the last five decades, especially in western Britain. But records are short and there is much natural year-to-year variability, which makes it hard to attribute observed trends to climate change. Nevertheless, recent modelling studies do point towards human-induced warming having a role to play in these and other recent floods.”

Cumbrian resident Dr Ed Henderson, a co-author of the review from the British Hydrological Society, said, “The effects of the floods are personal.  Thousands of Cumbrians, like people in other flood-affected parts of the country, have seen their lives upturned. Many have experienced life-changing financial losses and incredible stress.  Speaking with flood victims, the words that come out are despair, fear and anxiety - fear of flooding again and the anxiety of an approaching winter. Floods don't just take your home, the place where you should feel safe, they often take your future as well.”

Dr Nick Reynard, the Centre for Ecology & Hydrology’s Science Area Lead for Natural Hazards research, said, “Our new review clearly outlines the events of the last winter, as one of the most severe episodes of flooding to hit the UK in the last 100 years. Communities across the country were devastated. In response we are working hard with central government to improve flood estimation, and examine how potential mitigation measures, such as natural flood management, can help us reduce the impact of flooding in future.”

The analysis in the report was funded by the Natural Environment Research Council.

‘The Winter Floods of 2015/2016 in the UK’ review is an output from the National Hydrological Monitoring Programme (NHMP), operated jointly by the Centre for Ecology & Hydrology and the British Geological Survey. The NHMP was set up in 1988 and aims to provide an authoritative voice on hydrological conditions throughout the UK and has a particular obligation to document major contemporary hydrological events and to identify and interpret long-term hydrological change and variability. Monthly Hydrological Summaries for the UK are routinely published as part of this programme.

Hi-Res (13.8MB) and Lo-Res (2MB) versions of the full report can be downloaded below.

Katie joined UKCEH in October 2012 as a Hydrological Data Scientist with the majority of her role in the UK National River Flow Archive team, and is responsible for co-ordinating the acquisition and quality control of the annual update annual submissions of mean and peak river flow data from the UK Measuring Authorities, releasing these data to NRFA users, including the publication of versioned NRFA Peak