A new report from the UK Acid Waters Monitoring Network (AWMN) reveals that measures put in place over the last 20 years to reduce pollution from so-called acid rain are proving successful. 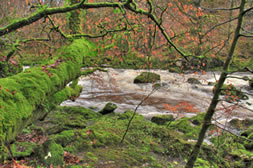 The report states that acidified lakes and streams around the UK are showing clear signs of both chemical and biological recovery in all affected regions. But it warns that recovery has been limited and that other stresses in future, especially from atmospheric nitrogen deposition and from climate change, may prevent a full recovery.

The Centre for Ecology & Hydrology (CEH) is one of the sponsors of the AWMN, which is funded principally by Defra. CEH makes a major contribution to analysis of water chemistry, database management and data analysis and interpretation. Chris Evans and Don Monteith of CEH were both involved in writing the new report, which was led by researchers at University College London and is the fifth major interpretative analysis of the network's results since it was established in 1988.

While the waters are recovering, the report reveals that there is a long way to go before plant and animal communities are restored to full health, with some acidified waters still devoid of the brown trout or salmon that once thrived in them.

"Acid rain", or more strictly Acid Deposition, is caused by the release of compounds of sulphur and nitrogen into the atmosphere, principally by the burning of fossil fuels, but also from emissions from motor vehicles and intensive agriculture. When these compounds react with water droplets, either in the atmosphere or on the ground, they create weak solutions of nitric and sulphuric acids, increasing the acidity levels of rain and soils, and acidifying rivers and lakes, especially in upland areas, where they create a toxic environment for aquatic life.

While upland waters are important ecologically in themselves, they also provide vital information on how they and their catchments are responding to environmental change.

Don Monteith, who also coordinates the UK Environmental Change Network (ECN), said, "The Acid Waters Monitoring Network provides the only scientifically robust national record of how the quality of water draining our uplands is changing. For example, it was this dataset that revealed that water colour had risen substantially across the UK uplands in recent decades and has since provided the evidence for the primary causes. This has attracted considerable interest from the water companies, for whom mounting water treatment costs are of increasing concern.

He continued, "More recently, the installation of submerged thermistors and stream flow monitors is increasing the network's capacity to investigate effects of changes in climate on the flow and chemistry and biodiversity of upland waters, complementing CEH's wider portfolio of research into upland and peatland systems."

Defra issued a statement to announce publication of the report. More information can be found on the Defra website.