June was a largely dry month, registering as the driest since 2006 for England, in contrast with many of the comparatively wet summer months witnessed in previous years, according to the latest update to the UK's most authoritative analysis of water resources status. 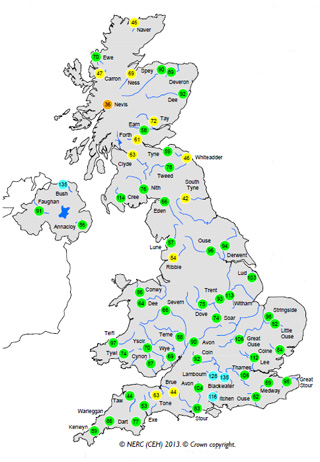 The analysis is contained in the latest monthly hydrological summary for the UK, covering the month of June 2013. The monthly summaries are produced by the National Hydrological Monitoring Programme, operated by the Centre for Ecology & Hydrology (CEH) in conjunction with the British Geological Survey.

Rainfall for Scotland and Wales was less than 75% of average and England received barely more than half of that expected in June. Above average rainfall was restricted to Northern Ireland and very localised pockets of Great Britain. River flows are generally below average across much of the country, although they predominantly fall within the normal range for the time of year.

Above average rainfall was restricted to Northern Ireland and very localised pockets of Great Britain. With the exception of these areas, there was a significant intensification of soil moisture deficits across the country; whilst this is not unusual for the time of year, it is markedly different to the erratic behaviour of soil moisture levels observed in previous years. Nevertheless, groundwater resources remain healthy, with most of the major aquifers characterised by moderately above average levels.

Rainfall deficits since the start of the year over most of Great Britain are reflected in moderate runoff deficiencies over the same timeframe in the responsive catchments of the north and west.

Summary lead author Simon Parry, from CEH, said, “With reservoir stocks and groundwater levels predominantly average to above average across the country, the water resources outlook remains healthy, although continued settled weather patterns over the coming months may cause locally depressed summer flows in responsive catchments, and the rapid increase in soil moisture deficits will likely delay the onset of river flow and groundwater recovery in the autumn."