Meteorologically, 2011 was a remarkable year: it was the second warmest in the UK temperature record (from 1910) and was notable for extreme regional disparities in rainfall receipt – with continuing drought conditions in the English Lowlands contrasting dramatically with Scotland, which had its wettest year on record. 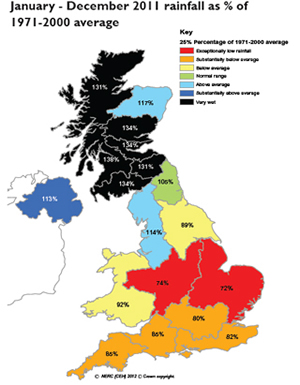 The above analysis is contained within the latest monthly hydrological summary (for December 2011) produced by the National Hydrological Monitoring Programme, operated by the Centre for Ecology & Hydrology in conjunction with the British Geological Survey.

Stocks increased in most UK reservoirs (and are healthy in a majority of gravity-fed impoundments), with particularly useful increases in the southwest, but they remain below average across much of southern England. Levels are particularly depressed at Bewl and Ardingly.

Concern for the groundwater resources outlook increased in December. Whilst muted recoveries were initiated in parts of the southern Chalk and more responsive aquifers during December, groundwater levels remain notably low across the Chalk and parts of the West Midlands, with exceptionally dry soils (for the time of year) continuing to inhibit infiltration in eastern areas.

2011 ended on a stormy note, with high winds and heavy rainfall, but the brunt of the storms was borne by upland areas. In the English lowlands, the frontal systems had limited impact, yielding average December rainfall which, whilst welcome following the dry autumn, was not sufficient to significantly relieve drought stress. Similarly, widespread and common flood alerts in northern Britain contrasted with seasonally depressed flows in the English lowlands.

Jamie Hannaford from the Centre for Ecology & Hydrology said, “Over the next 10 - 12 weeks substantially above average rainfall is needed in some areas of England to improve the water resources outlook for the rest of 2012.”