A new study has found that the sensitivity and recovery of UK butterfly populations to extreme drought is affected by the overall area and degree of fragmentation of key habitat types in the landscape. 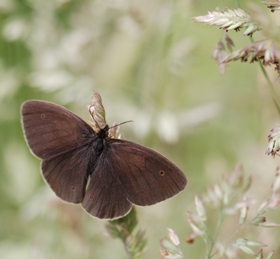 The analysis, published today in the scientific journal Ecography, used data on the Ringlet butterfly collected from 79 UK Butterfly Monitoring Scheme sites between 1990 and 1999, a period which spanned a severe drought event in 1995.

The study was led by Dr Tom Oliver from the NERC Centre for Ecology & Hydrology (CEH) in collaboration with colleagues from CEH and the charity Butterfly Conservation.

Lead author Dr Tom Oliver from the NERC Centre for Ecology & Hydrology said, “Most ecological climate change studies focus on species’ responses to gradual temperature rise, but it may be that extreme weather will actually have the greatest impact on our wildlife. We have provided the first evidence that species responses to extreme events may be affected by the habitat structure in the wider countryside; for example in the total area and fragmentation (i.e. isolation) of woodland patches.”

The UK has suffered from a number of severe droughts over the last few decades (e.g. 1976, 1995). Under global warming, the frequency of such summer droughts is expected to increase. The intense summer drought in 1995 led to marked declines in insect species associated with cooler and wetter microclimates and scientists are interested in how to make species populations more resilient, i.e. more resistant to and more able to recover from these extreme climate events.

The Ringlet Aphantopus hyperantus is a grass-feeding butterfly commonly found close to woodland edges and known to be susceptible to drought effects. The researchers found that, following the 1995 drought, Ringlet populations not only crashed most severely in drier regions but, additionally, the habitat structure in the wider countryside around sites influenced population responses. Larger and more connected patches of woodland habitat reduced population sensitivity to the drought event and also facilitated faster recovery.

Co-author Dr Tom Brereton from Butterfly Conservation said, “Our results suggest that landscape-scale conservation projects are vital in helping species to recover from extreme events expected under climate change. However, conversely, if we do nothing, the high levels of habitat fragmentation will mean species are more susceptible.”

Co-author Dr David Roy from the NERC Centre for Ecology & Hydrology added, “The delayed recovery of butterfly populations is worrying given that severe summer droughts are expected to become common in some areas of the UK, for example, South East England. If populations don’t recover by the time the next drought hits, they may face gradual erosion until local extinction.”

CEH issued a press release to accompany the publication of this paper.

The research was published in the journal Ecography on 31 October 2012.

Ecography has an Impact Factor of 4.188. In 2011 the journal ranked 4/37 (Biodiversity Conservation); 26/134 (Ecology) in the ISI Journal Citation Reports Ranking

Funding: The data used in the study are from the UK Butterfly Monitoring Scheme (UKBMS). UKBMS is a partnership between Butterfly Conservation and the Natural Environment Research Council, Centre for Ecology & Hydrology. The UKBMS is co-funded by a consortium of government agencies, including Defra, the Countryside Council for Wales, Forestry Commission, Joint Nature Conservation Committee, Natural England, Northern Ireland Environment Agency and Scottish Natural Heritage.