The effectiveness and value for money of agri-environment schemes (AES) have been questioned by some academics and commentators, but researchers working on a Rural Economy and Land Use Programme (Relu) project have found that a relatively small amount of training for farmers engaged in such initiatives could significantly enhance their outcomes. 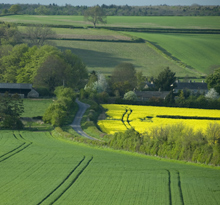 An interdisciplinary team, comprising researchers from the NERC Centre for Ecology & Hydrology (CEH) and the universities of Exeter and Reading, investigated two options for creating wildlife habitats that are currently available under the Entry Level Stewardship Scheme: the first aims to provide winter food for farmland birds by sowing high energy seed crops, and the second provides pollen and nectar-rich flowering plants for butterflies and bees. The research took place on 48 farms over a period of five years, with half of the participating farmers undertaking training.

The results showed that agri-environment schemes do have the potential to provide good resources for bumblebees, butterflies and birds. However, not only are the experience and skills of the farmer very important in ensuring that the schemes are implemented as effectively as possible, but his or her attitude and engagement with the scheme’s objectives also play a major role in their level of success.

The researchers found that the farmers who took part in a training course showed a higher level of skill, and were also more positive and professional in their approach when putting the schemes into practice. They created higher quality wildlife habitats and this translated into local increases in target species of birds, butterflies and bees. The farmers also said that they enjoyed the training and found it beneficial.

The scientists concluded that a relatively small investment in training, with some follow-up advice made available, could provide good value for money by enhancing the environmental outcomes.

Professor James Bullock from CEH was involved in the project. He said, “Stimulating the motivation and understanding of farmers does seem to be key to getting the most out of these agri-environmental interventions. It may be that financial incentives alone are not the most effective means of getting farmers involved."

He continued, "Of course, it is vital to have the right people delivering such training. They must have the experience and skills to command the respect of the farmers who often have years of experience in managing their own land. And we also felt that the farmers’ own knowledge of the environment and the needs of local wildlife populations could be fed back much more into policy and practice development."

"The farmers who took part in training during our research project were enthusiastic about the benefits and really enjoyed the experience. But obviously if this became a standard element in agri-environment schemes it would be necessary to consider whether training should be voluntary or mandatory. One possible option would be to include participation in training in the calculation of the points required to meet minimum stewardship thresholds. This would mean it was a voluntary option but there would be an incentive to take part.”

The Rural Economy and Land Use Programme (Relu), which issued a press release for this story, is an interdisciplinary collaboration between the Economic and Social Research Council, the Biotechnology and Biological Sciences Research Council and the Natural Environment Research Council (NERC), with additional funding provided by the Scottish Government and Defra.

Further information about the results is available in the latest Policy and Practice Note in the Relu series which may be downloaded from the Relu website [PDF, 2.11mb].