April was a notably cool month with rainfall close to the long-term average at the national scale – but spatial variations in precipitation totals were large and appreciable deficits have become established in some regions over the first four months of 2013, according to the latest update to the UK's most authoritative analysis of water resources status. 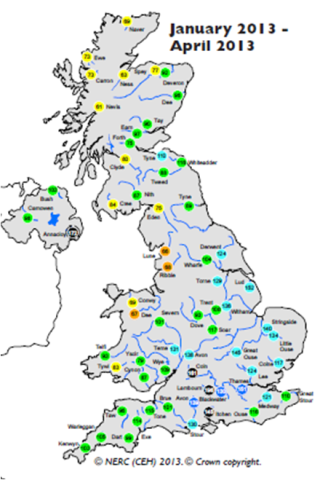 Notwithstanding the low temperatures, evaporation losses have remained within the normal range and soil moisture deficits exceeded the end-of-April average across many eastern and central areas of the country. In the absence of above average May rainfall, this could signal the termination of the 2012/13 recharge season across much of the outcrop areas of the major aquifers.

The analysis is contained in the monthly hydrological summary for the UK, covering the month of March 2013. The monthly summaries are produced by the National Hydrological Monitoring Programme, operated by the Centre for Ecology & Hydrology (CEH) in conjunction with the British Geological Survey.

Terry Marsh from the Centre for Ecology & Hydrology said, “Groundwater levels are still above average in most areas (with a continuing possibility of landslide activity in vulnerable areas and a diminishing risk of groundwater flooding) and the water resources outlook is healthy. Rainfall over the next 4-6 weeks will be particularly influential in determining river flows and the status of groundwater resources through the summer.”

The latest summary also showed that reservoir stocks were healthy entering May, exceeding 90% of capacity at the great majority of index reservoirs across the country.

April runoff totals were also generally well within the normal late-spring range, but river flow patterns varied markedly across the country, with significant flooding in Scotland around mid-month and seasonally depressed runoff around month-end in a number of rivers draining impermeable catchments to the south.