A new scientific study of the wet summer of 2007 confirms that the floods were a very singular event and does not support the idea that the exceptional river flooding was linked to climate change. This conclusion is contained within a comprehensive hydrological appraisal of the summer 2007 floods carried out by scientists from the Centre for Ecology & Hydrology.

The new report, The summer 2007 floods in England and Wales − a hydrological appraisal, brings together both flood and meteorological data and systematically breaks down the series of events leading to extensive river flooding, which had no close modern parallel for the June-August period across the UK.

Lead author, Terry Marsh, comments: “The river floods of summer 2007 were a very singular episode, which does not form part of any clear historical trend or show consistency with currently favoured climate change scenarios.”

Mr Marsh adds: “The exceptional river flooding last summer fuelled speculation that flood risk is increasing due to global warming. Due to the inherent variability of the UK climate, any extreme hydrological event cannot readily be linked directly to climate change.”

The new report recognises that the 2007 flooding was remarkable in its extent and severity and truly outstanding for a summer event. River flows in many areas exceeded the design limits of many flood alleviation schemes. Rainfall amounts and intensities led to urban drainage systems being overwhelmed in a number of areas. This underlines the UK’s continuing vulnerability to climatic extremes, but long-term rainfall and river flow records confirm the exceptional rarity of the hydrological conditions experienced in 2007.

The report complements a recent paper on flood trends in the UK, which was led by Jamie Hannaford at the Centre for Ecology & Hydrology and published in the International Journal of Climatology late in 2007. The paper found that trends over the last 30-40 years can be identified, but that there is little compelling evidence over the long term to suggest that flood magnitude is increasing.

Mr Marsh continues: “Extreme flooding in the UK is historically rare but vulnerability to flooding has increased markedly as a consequence of floodplain development. This is despite increased resilience to flood risk through improved flood alleviation strategies and more sophisticated flood warning capabilities.”

The new study is an output from the National Hydrological Monitoring Programme (NHMP), operated jointly by the Centre for Ecology & Hydrology and the British Geological Survey.

This work was featured on 'Leading Edge' on BBC Radio 4 on 13th March 2008. You can listen to the programme here (external - audio player required).

The new report is an output from the National Hydrological Monitoring Programme (NHMP), operated jointly by the Centre for Ecology & Hydrology and the British Geological Survey. The hydrometric data analysed in this report were provided primarily by the UK hydrometric measuring authorities (the Environment Agency, Scottish Environment Protection Agency and, in the Northern Ireland, the Rivers Agency); a substantial proportion of the meteorological data used was provided by the Met Office. Most of the data is collated within the National River Flow Archive.

The NHMP was set up in 1988 to document hydrological and water resources variability across the UK. The measuring authorities, together with Defra and OFWAT, provide financial support to the NHMP for the production of monthly Hydrological Summaries for the UK. 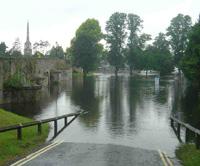