Phosphorus pollution from sewage, rather than in agricultural fertilisers, is the main culprit for polluting English rivers, according to long-term research recently published in three papers in Science of the Total Environment. The study was led by Professor Colin Neal, a hydrologist from the Centre for Ecology & Hydrology, in collaboration with scientists from Bangor and Durham University. 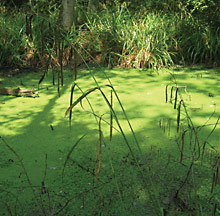 The new research builds on data collected over a ten-year period from nine UK rivers, including the river Thames. The research team used the chemical element boron to provide clues as to which of these two sources was the primary cause of eutrophication.

Phosphorus pollution is known to cause the process of eutrophication in rivers, a highly problematic issue that causes excessive growth of algae, which smothers and blocks out light for other aquatic plants and animals. Phosphorus sources include runoff from fertilised agricultural fields, and household effluent from sewage treatment works and septic tanks.

Boron is used as a whitener in washing powders.  It has been the key bleaching agent for many years in household laundry brands and ends up in rivers by transmission through the sewage system. The researchers found a link between the levels of concentration of phosphorus and boron in English rivers, leading them to conclude that sewage was the likely source of pollution.

“The Kennet example shows that the problem cannot be solved just by removing phosphorus - the whole ecosystem needs fixing."

The phosphorus used in fertilisers for agriculture is tied to sediments and soils and stays there until it is washed away by the rain. Higher water levels in the winter result in more phosphorus from agriculture entering the rivers. Sewage levels, on the other hand, are steadier throughout the year.  Phosphorus levels are at their highest in the summer when the volume of the river water is low, and the sewage entering the water is not diluted. This is also the time of year when algae and plants are most active.

The unpredictable weather of recent years appears to have worsened the conditions by changing the timings and durations of high and low flows in English rivers. Likely causes could include decreased river flow, stagnant waters and a combination of factors that led to profound changes in the ecosystem.

Finding a solution for eutrophication issues is not easy.  The team’s research also showed that along the river Kennet, off the river Thames, all large sewage treatment works have had a lot of the phosphorus removed from their effluents, but eutrophication still appears to be a major problem.

Professor Neal said, “The Kennet example shows that the problem cannot be solved just by removing phosphorus - the whole ecosystem needs fixing. We have to think more about how to make our rivers clean and how to restore the ecosystem back to what was before.

"We need to address far more than phosphorus concentrations in rivers, such as flow, habitat, and water resources which requires new science that looks at the complex relationships between hydrology, biology, chemistry and habitat, as well as our interactions and needs.”

The study comes as part of the Catchment Hydrology, Resources, Economics and Management (ChREAM) project, funded under the joint ESRC, BBSRC and NERC Rural Economy and Land Use (RELU) programme. Contributions also come from the DEFRA-funded PARIS (PE0116) and PSYCHIC (PE0202) projects, the CEH component of the NERC funded Land Ocean Interaction Study (LOIS) and within several CEH programmes of NERC. For the Devon sites, this work was funded by a joint CEH (NERC)/IGER (BBSRC) core funded initiative.