The Centre for Ecology & Hydrology is among the 18 organisations today signing a major agreement that will see the sharing of valuable data concerning seabirds around Britain and Ireland's seas. 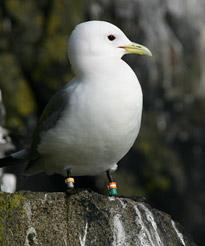 Nature conservation groups are teaming up with government advisory organisations based in England, Wales, Scotland, Northern Ireland, Republic of Ireland, Isle of Man and the Channel Islands to sign the Seabird Monitoring Partnership (SMP) Statement of Intent. A website-based reporting system is also being set up.

"Combining resources and expertise will help to ensure the wealth of available information is put to best use, at a time when we are seeing worrying declines in some species, such as the kittiwake and Arctic tern."

The agreement is the latest step forward for the SMP, which celebrates its 20th anniversary this year. The partnership provides information to help agencies work to maintain seabird populations in Britain and Ireland. It ensures that sufficient data on breeding numbers and appropriate demographic and behavioural information on seabirds are collected, both regionally and nationally. These enable their status to be assessed, and allow for the monitoring of impacts of ecosystem pressures, such as climate change, fisheries and non-native mammalian predators.

The Joint Nature Conservation Committee (JNCC), the statutory adviser to the UK Government on UK and international nature conservation, is one of the signatories to the agreement. Its Science Director, Andrew Stott, said the agreement marked an exciting time for seabird conservation in the UK.

"The Partnership demonstrates a commitment by all partners to cooperate effectively for the benefit of seabirds. Combining resources and expertise will help to ensure the wealth of available information about seabirds is put to best use, at a time when we are seeing worrying declines in some species, such as the kittiwake and Arctic tern."

The CEH study site on the Isle of May National Nature Reserve is one of the key monitoring sites within the Seabird Monitoring Programme. 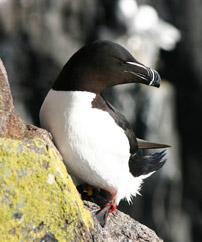 The site forms part of CEH's long-term monitoring network to detect effects of environmental change. Since 1973 scientists have been monitoring several species of seabirds here, including razorbills, European shags, guillemots and black-legged kittiwakes. Analysis of data from the Isle of May has confirmed that numbers of black-legged kittiwakes have declined by more than half since 1990, with the decline linked to climate change.

Studies here have also shown that lesser sandeels, the most important forage fish in the North Sea, have become substantially smaller over the last 30 years.

Speaking about the new data sharing initiative, Professor Sarah Wanless, senior ecologist at CEH, said "We welcome this new agreement which will bring together data from across the UK, providing fresh insights into the impacts of climate change, fisheries and offshore developments on seabirds."

Dr Richard Luxmoore, Senior Nature Conservation Advisor of the National Trust for Scotland, said they were delighted to be taking an active role in the programme.

"As the guardians of nearly 10 percent of all of the breeding seabirds in the European Union, we believe we have a particular responsibility to monitor their fortunes," he explained.

“Seabirds are known to be impacted by climate change, which is occurring six times as fast in the sea as it is on the land, and they can provide early warning of its effects.”

The agreement will continue until 2015, subject to the outcome of annual reviews.